Duterte: My candidacy for the presidency is now on the table | Inquirer News
Close
menu
search

Duterte: My candidacy for the presidency is now on the table 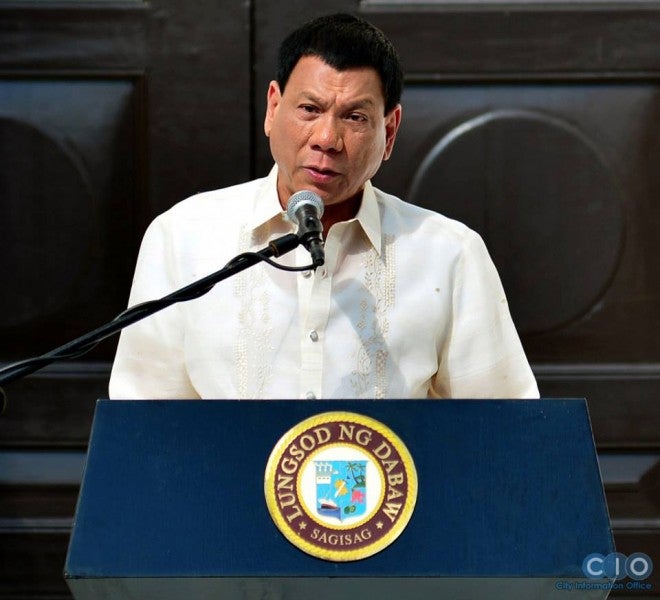 The tough-talking Davao City Mayor Rodrigo Duterte may run for the presidency after all.

“My candidacy for the presidency is now on the table,” Duterte said at a birthday celebration of his law school classmate in Dasmariñas, Cavite, on Saturday night.

Duterte in a lengthy speech that lasted for about 30 minutes said what changed his mind was the recent decision of the Senate Electoral Tribunal (SET) throwing the disqualification case questioning the citizenship of Senator Grace Poe who has been accused of not being a natural-born citizen.

“(Poe) will be presumptive president whose citizenship is based on presumption. The highest position is reserved for a true-blue Filipino,” Duterte said.

He said he would still “fill in the gaps” and talk to the members of his political party PDP Laban led by Senator Koko Pimentel about his decision.

When asked if he is going to file his candidacy at the Comelec on Monday, Duterte said: “Not yet. I have to make the rounds to fill in the gaps.”

He said it would be a disrespect to members of PDP Laban and Senator Aquilino “Koko” Pimentel III, who are among those who have been pushing him to run if he does not talk to them about his decision.

“Let’s see,” Duterte said when asked if his decision was final.

He said he would change his mind unless the SET reverses its ruling or Poe shows the public her real mother.

“Show me your real mother and I will even campaign for you,” Duterte said.

In the end, it will be Poe vs Duterte

Poe camp fires back at Duterte