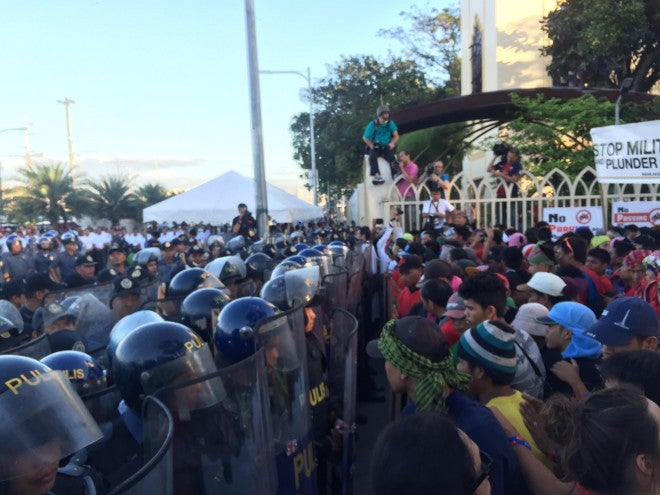 The lumad protesters intend to march to Liwasang Bonifacio to join other militant groups before proceeding to the Philippine International Convention Center in Pasay City where Apec meetings are being held, but the police would not let them pass.

Police forces were armed with shields and wooden sticks as they block the protesters from leaving the church compound. Tension started to rise when the protesters attempted to force their way out.

Army trainees and fire trucks are also on standby in the vicinity.

Noting that lumads are not security threats, Bayan Muna Rep. Carlos Zarate told INQUIRER.net that the police response to protest actions against Apec cannot be justified.

(Even police trainees were used to block our lumad brethren who only wanted to express their grievances particularly in the issue of the Apec. What the Aquino administration is doing is overkill, sending our way scores of policemen, military, and firefighters.)

The militant lawmaker said the Apec condones exploitation of land and natural resources and militarization in Mindanao through its policies that favor big mining corporations.

(The agenda is the exploitative mining in Mindanao. Our real problem in Mindanao is the entry of large mining corporations and this is the reason behind militarization and the killing of our lumad brethren.)

(They cannot conceal the fact that two decades after we first hosted the Apec, poverty still persists in the Philippines and the economy continues to decline.)

Highlighting the right to peaceful assembly, Zarate said the group has been negotiating with police officers on the ground so they can move forward.

(We said we wanted to hold a peaceful rally outside. They were toying with us, asking us for a permit, etc. Just this, though, whatever security measures they implement will not prevent the people from expressing their grievances and demands from the government.)

(We have no ill intentions and we need not approach government agents in a violent manner.)

The lumads, who have been camping out in Manila since late October, previously stayed in Liwasang Bonifacio but were forced to transfer to Baclaran church upon orders from the local government.

Militant groups in Liwasang Bonifacio, which held a vigil protest at the freedom park on Wednesday evening, are eyeing to march to PICC amid strong police presence. CDG