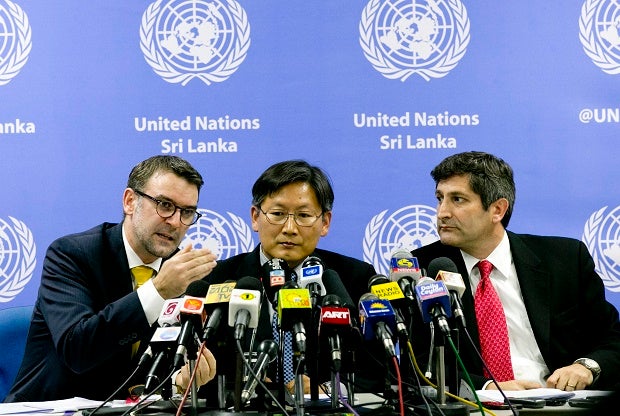 Members of the UN working group on enforced disappearances from left, Bernard Duhaime, Tae-Ung Baik and Ariel Dulitzky address the media in Colombo, Sri Lanka, Wednesday, Nov. 18, 2015. The UN team of experts said it saw a secret torture center inside a Sri Lankan navy base where many post-civil war detainees were believed to have been kept. AP

COLOMBO, Sri Lanka — A UN team says it found a secret underground detention center at a Sri Lankan navy base where many post-civil war detainees were believed to have been interrogated and tortured. The navy, however, denied there was any such center at the base.

The announcement late Wednesday by three experts from a UN working group on enforced disappearances comes amid growing international pressure for a full investigation into rights violations and alleged atrocities during and after Sri Lanka’s decades-long civil war, which ended in 2009.

Dulitzky said they also saw a secret detention center where “interrogation and torture took place” inside underground cells at a naval base in eastern Sri Lanka.

“We believe it’s an important discovery and it should be properly investigated. It’s likely that many more people were in that detention center,” he said at a news conference at the end of their visit in Sri Lanka.

However, navy chief Vice Admiral Ravi Wijegunaratne said there was no torture center at the base and that no one had been detained in the underground cells except for four Tamil children who had been illegally kidnapped for ransom and later killed by several naval personnel, who were now in prison.

Tens of thousands of people are believed to have been killed in the final stages of the civil war between government forces and separatist Tamil Tiger rebels. Scores of rebels and ethnic Tamil civilians were arrested after the rebels were defeated, and remain unaccounted for.

In addition, suspected rebels, sympathizers, human rights activists and critical journalists were abducted by unknown groups after the war and are listed as missing.

The experts said they believe there were many other such centers used to hold people who had forcibly disappeared.

Since January, the government has taken steps to probe some unresolved disappearances and killings. Some suspects have been arrested.

“We are encouraged by the positions adopted by the government in recent months as there are positive steps, but more needs to be done,” Duhaime said. “There have been lots of promises, but the time for promises is over. What’s really important is that there be results now.”

A final report on the team’s visit is to be presented to the UN Human Rights Council next September.

The UN human rights chief has recommended that Sri Lanka set up a special hybrid court that would include foreign judges and investigators to examine the alleged atrocities, saying Sri Lanka’s own courts are not yet ready to carry out a fair judicial process.