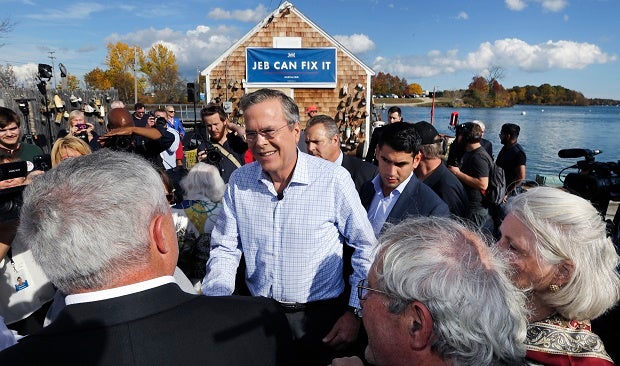 The former Florida governor, a son and brother of two presidents, has not lived up to the hype and monumental fundraising of the first months of his campaign, when he was riding high as presumptive Republican frontrunner.

He is stuck in the middle of a broad GOP field, watching helplessly as brash billionaire Donald Trump and retired neurosurgeon Ben Carson, both political outsiders, sit atop the Republican heap.

Eager for a breakout moment, he went after his onetime political protege at the debate, Senator Marco Rubio, calling him out for skipping votes in the Senate.

But the attack fell flat, and several commentators interpreted the exchange as the moment the apprentice surpassed the political mentor.

Pressed Thursday by Fox News, whose anchor cited analysts remarking that Bush’s campaign was “terminal,” Bush laughed and shrugged it off.

“I knew this was going to be a long journey, but to suggest that the campaign is terminal? Come on, that’s pretty funny,” Bush said.

“Were still in October,” nearly 100 days before the first state-wide vote in the 2016 presidential primary, he noted.

“All across this country, we’re the one that has the best organization. And I’m going to work hard to be able to earn people’s support.”

Bush said he remains the Republican whom Democrats fear most, “because I have a proven record of success,” an apparent knock against outsiders Trump, Carson and former Hewlett-Packard chief executive Carly Fiorina.

The comments also appeared aimed at Rubio and two other freshman senators running for president, conservative Ted Cruz and Libertarian-leaning Rand Paul, who between them have sponsored just two bills that have become law, Bush noted.

“I can win, and that’s why I get attacked by the left more than any other candidate,” Bush said.

Donors have begun privately expressing concerns about Bush, especially after his campaign slashed payroll and scaled back on travel expenses.

His famous family rallied around his campaign last weekend, with presidents George H.W. Bush and George W. Bush meeting privately with donors, apparently to reassure them about Jeb’s long-term commitment.

As for the jab at his Florida friend, Bush insisted it was not personal.

“I’m not demonizing Marco Rubio to point out he has the worst attendance record in the United States Senate,” he said.

Jeb Bush leaves door open for use of torture by government

Jeb Bush hit from both sides on birthright citizenship