Jeb Bush hit from both sides on birthright citizenship 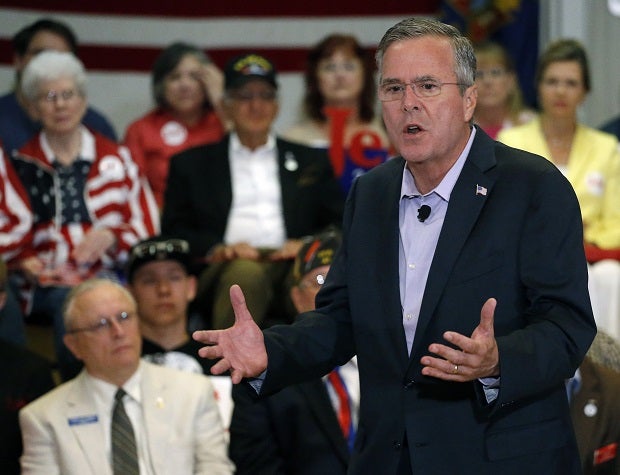 ENGLEWOOD, Colorado — Jeb Bush came to the Veterans of Foreign Wars post to talk about veterans’ affairs but two words hung over the town hall event in a Denver suburb Tuesday — anchor babies.

That’s the loaded term that Republican presidential front-runner Donald Trump has used to refer to US-born children of people who come to the country illegally. The babies have automatic US citizenship under the first section of the 14th Amendment to the Constitution, something that Trump and other foes of high immigration levels decry.

As Bush has detailed his position — supporting birthright citizenship but concerned about the “birth tourism” industry that flies predominantly wealthy Asian mothers to the US for childbirth — he’s been questioned more than the reality show star. In response to a query at the town hall, Bush showed his frustration.

“When I was 17 years old, I fell in love with Columba Garnica de Bush,” he said, referring to his Mexican-born wife. “It’s going to be really hard for me to get lectured to by anybody about the politics of immigration.”

Last week, after Bush used the term “anchor babies” to say he was concerned about some possible abuses of birthright citizenship, he came under fire from the left for using what immigrant advocates consider a derogatory term. On Monday, Bush said he was talking about some “Asian people” rather than the vast majority of immigrants having children in the US That drew another round of criticism from Democrats.

On Tuesday, Bush elaborated even further: “I was talking about a very narrow system of fraud in which people are bringing in pregnant women to have babies to exploit birthright citizenship.”

Bush is describing a real phenomenon that has drawn concern from the Obama administration. Earlier this year, federal authorities served search warrants on three dozen homes in California as part of an investigation into three businesses that fly Chinese expectant mothers to the United States, put them up in special hotels and deliver their children. Authorities filed charges against 10 Chinese nationals who violated federal court orders in the case and fled the country.

The size of the “birth tourism” business is unknown. The Center for Immigration Studies, a Washington think-tank that favors greater restrictions on immigration, has estimated that about 40,000 babies are born to birth tourists, most of whom legally enter the country, annually.

Still, Democrats continued to hammer Bush for the statements, indicating that the party considers him a more likely eventual Republican nominee than Trump, despite the real estate mogul’s lead in the polls. In a hastily organized conference call Tuesday afternoon, Democratic Rep. Judy Chu of California did not mention Trump but called on Bush to apologize to Asian Americans.

Democratic Rep. Mike Honda of California, who represents the nation’s only majority-Asian congressional district, called Bush’s statement “a slur against all immigrants.”

In Colorado, many of the several dozen people at the town hall asked Bush about immigration. One asked him to describe the difference between his stance and Trump’s, a contrast Bush has been increasingly trying to make. “Mr. Trump believes you can just round people up,” said Bush, calling that idea contrary to American values and not “practical.” Bush favors a path to legal status but not citizenship for many of the people in the country illegally.

Still, he can take tougher stances on immigration as well. He referred to last year’s influx of Central American youth, who received a special review of their immigration status under a 2008 law against human trafficking signed by Bush’s brother as president. Jeb Bush suggested the country should follow the lead of yet another President Bush — his father, George H.W. Bush — whose administration stemmed an influx of Haitian refugees by imprisoning some and sending a signal they would not be admitted.

Meanwhile, Trump is gloating about Bush’s attempts to wrestle with the birthright citizenship issue. At a news conference Tuesday, Trump said Bush “is taking tremendous criticism for using the term anchor baby. No one cares when I use it because they expect it.”