Jeb Bush leaves door open for use of torture by government 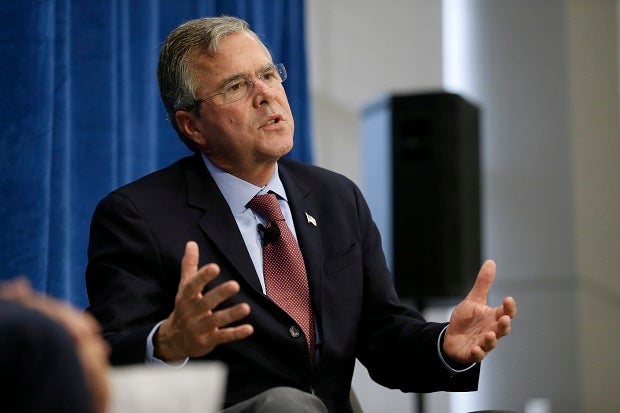 DAVENPORT, Iowa — Republican presidential candidate Jeb Bush on Thursday declined to rule out resuming the use of torture under some circumstances by the US government.

The former Florida governor said that in general, he believes torture is inappropriate, and that he was glad his brother, former President George W. Bush, largely ended the CIA’s use of the techniques before he left office. The CIA used waterboarding, slapping, nudity, sleep deprivation, humiliation and other methods to coerce al-Qaida detainees — methods the military would be prohibited from using on prisoners of war.

“I don’t want to make a definitive, blanket kind of statement,” Bush told an audience of Iowa Republicans, when asked whether he would keep in place or repeal President Barack Obama’s executive order banning so-called enhanced interrogation techniques by the CIA.

Bush, because of his brother and father — both former US presidents — had the most name recognition entering the race to win the 2016 Republican Party nomination. However, billionaire businessman Donald Trump has been dominating the race this summer, even though he is still considered a long-shot candidate for the nomination.

A Senate report released last year cited CIA records in concluding that the techniques were more brutal than previously disclosed, that the CIA lied about them, and that they failed to produce unique, life-saving intelligence. The CIA and its defenders take issue with the report.

Jeb Bush said he believed that the techniques were effective in producing intelligence, but that “now we’re in a different environment.”

He suggested there may be occasions when brutal interrogations were called for to keep the country safe.

“That’s why I’m not saying in every condition, under every possible scenario,” Bush said.

Later on Thursday in Iowa, Bush said there is a difference between enhanced interrogation techniques and torture, but declined to be specific. “I don’t know. I’m just saying if I’m going to be president of the United States, you take this threat seriously.”

Bush has been walking a careful path, seeking to disassociate himself from some of the unpopular aspects of his brother’s legacy while praising him.

In discussing the Iraq war, for example, Bush, who previously acknowledged that the intelligence didn’t support the decision to invade, on Thursday said he had learned from some of the mistakes made during the occupation, including what he said was a wrong decision to disband the Iraqi military. He said his brother also now believes that was a mistake.

Bush blames the rise of the Islamic State group on what he said was Obama’s failure to negotiate an agreement to leave US troops there in 2011.

He repeated his call for a more aggressive posture toward the Islamic State group but, like the Obama administration, he opposes sending in regular US ground forces. He does favor putting special operations troops on the battlefield.

Bush spoke at a foreign policy forum sponsored by Americans for Peace, Prosperity and Security, a group chaired by Mike Rogers, a former Republican congressman from Michigan who chaired the House Intelligence Committee.