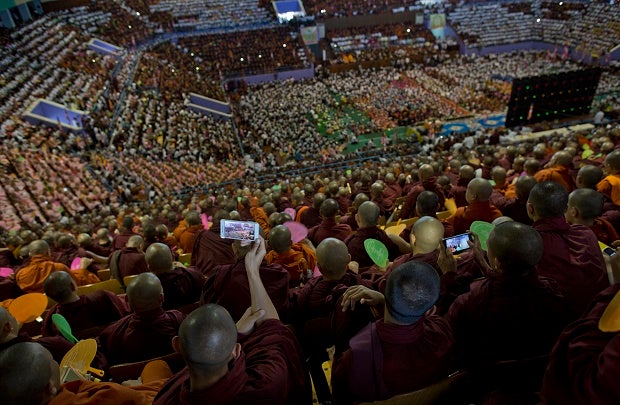 Buddhist monks take pictures with their mobile phones during a gathering of nationalist Buddhist monks and their supporters to celebrate four controversial bills that recently become laws in Yangon, Myanmar, Sunday, Oct. 4, 2015. More than 10,000 people turned out to celebrate the passage of four ‘race and religion’ laws that critics say discriminate against women and members of Myanmar’s Muslim minority. AP

UNITED NATIONS — A United Nations investigator accused Myanmar of discrimination and urged the government to take immediate action to allow minorities and migrants to vote in November elections.

Yanghee Lee, the special rapporteur on human rights in Myanmar, also urged the country’s Election Commission to establish an independent process to review the disqualification of candidates, many of them Muslims — including two current members of parliament.

Lee told said Thursday that the Nov. 8 legislative elections will be “an important milestone” in the country’s democratic transition. But she said the elections won’t be free and fair unless they are inclusive.

“The credibility of the elections will be judged by the environment in which they are conducted and the extent to which all sectors of Myanmar society have been allowed to freely participate in the political process,” Lee said.

READ: Suu Kyi urges action on illegal use of religion in election campaign

She stressed that “the disenfranchisement of certain communities and groups, particularly on discriminatory grounds, does not meet that test.”

Lee pointed to the disenfranchisement of some 760,000 people who previously held temporary registration cards, mainly Rohingyas in Rakhine state, but also ethnic Chinese and Indians. They had the right to vote in the 2010 and 2012 elections but Myanmar’s President Thein Sein announced that all temporary registration cards would expire on March 31 and holders of new identity cards are not allowed to vote.

The Rohingya are considered Bangladeshis by the government, and in Rakhine state, where most of them live, their rights have been stripped and their movement severely restricted.

Lee said the government’s restrictions on freedom of expression also undermines “independent and critical voices” critical for a free and fair election.

Lee called for the government to take urgent steps to ensure full respect for freedom of expression, assembly and association — and easing arbitrary arrests, detentions and disproportionate sentences against those exercising their rights.

Myanmar’s UN Ambassador U Kyaw Tin rejected rejected the “inaccurate and distorted” allegations in Lee’s report, telling the General Assembly that the government is committed to make the election “free, fair and transparent.”