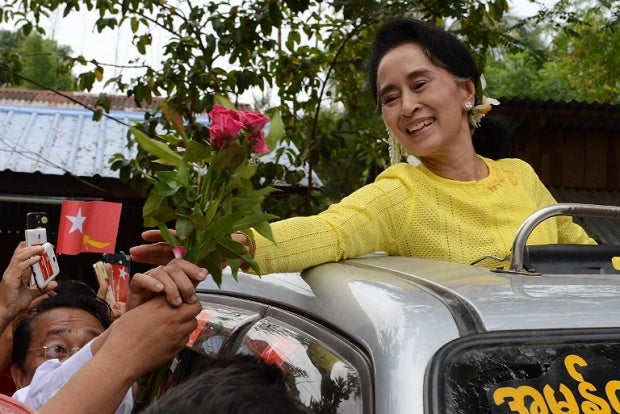 Myanmar opposition leader Aung San Suu Kyi receives roses from a supporter during a campaign rally for the National League for Democracy (NLD) in Kawhmu on the outskirts of Yangon on October 24, 2015. Suu Kyi urged the government to take action against people using religion to stir tensions as campaigning intensifies for landmark polls next month. AFP

Campaigning in her rural constituency of Kawhmu on Saturday, Suu Kyi addressed the thorny issue of minority rights when a Muslim villager expressed a wish for equality if the National League for Democracy (NLD) sweeps to power as is widely tipped.

“As our party respects the rule of law, I can say that we will treat all equally,” Suu Kyi said after her speech to some 1,000 party supporters gathered in the village of Upper Wartheinkha.

The Nobel laureate repeated recent claims that her political opponents were using religion in the Buddhist-majority nation to divide people ahead of the November 8 polls.

But this time she went a step further by questioning why the army-backed ruling Union Solidarity and Development Party (USDP) was not enforcing the law banning the use of religion in political campaigns.

“The government needs to safeguard the law for people to be able to live peacefully. We have to question the ruling authorities on why they’re not taking proper action,” she said.

In March it also revoked temporary identity documents, stripping hundreds of thousands of minority Rohingya Muslims in the western state of Rakhine of voting rights.

On its campaign trail in recent weeks the USDP has urged voters to pick it as the party which safeguards religious rights, at a time when radical monks are preaching the message that Muslims threaten the social fabric of Myanmar.

Suu Kyi herself has faced accusations of bowing to religious hardliners.

Her party has fielded no Muslim candidates for the polls — part of a wider loss of political representation for a minority that makes up around five percent of the population.

International powers including the US have raised fears that surging religious tensions in Myanmar could spark conflict ahead of polls seen as a crucial test of its transition towards democracy after decades of military rule.