Defense secretary says US is retooling fight against IS 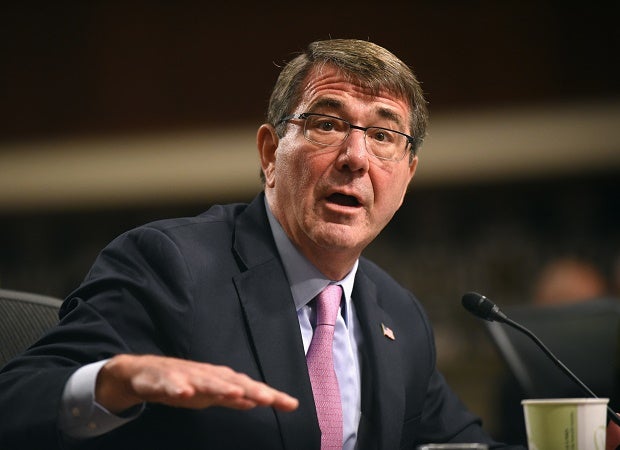 Defense Secretary Ash Carter testifies on Capitol Hill in Washington, Tuesday, Oct. 27, 2015, before the Senate Armed Services Committee. Carter said Tuesday that the US is willing to step up unilateral attacks against Islamic State militants in Iraq or Syria, a signal that the US would escalate American involvement beyond airstrikes by giving the go-ahead for US special operations forces’ raids on the ground. AP

WASHINGTON — Signaling a possible escalation of US military action in the Middle East, Defense Secretary Ash Carter said Tuesday that the United States is retooling its strategy in Iraq and Syria and would conduct unilateral ground raids if needed to target Islamic State militants.

The US has done special operations raids in Syria and participated in a ground operation to rescue hostages last week in northern Iraq that resulted in the first US combat death in Iraq since 2011. Carter did not say under what circumstances the US might conduct more ground action, but said, “Once we locate them, no target is beyond our reach.”

“We won’t hold back from supporting capable partners in opportunistic attacks against ISIL, or conducting such missions directly, whether by strikes from the air or direct action on the ground,” Carter said, using an acronym for the militant group.

Carter and Marine Gen. Joseph Dunford, chairman of the Joint Chiefs of Staff, testified before the Senate Armed Services Committee. Republicans harshly criticized the Obama administration’s strategy in Syria and Iraq, where IS militants have captured large swaths of territory and have largely fought the US-led coalition to a stalemate.

With little recent progress in defeating the militant group, the defense secretary’s testimony outlined a changing US approach to the fight against IS. The changes point toward the prospect of deeper US military involvement, although President Barack Obama has said he would not authorize a major commitment of ground combat forces.

Among other options being considered is providing close-air support for Iraqi ground forces with Apache helicopters or other aircraft, and embedding US military advisers with smaller Iraqi units, thus placing the Americans closer to the front lines. That’s according to defense officials who spoke on condition of anonymity to discuss internal deliberations.

The US now has about 3,300 troops in Iraq to train and advise Iraqi forces and to protect US facilities. There are no US troops in Syria.

Among options being considered is using US Army Apache helicopters and perhaps other aircraft to provide close-air support for Iraqi ground troops in certain circumstances, one US defense official said after Carter testified. The official was not authorized to discuss internal deliberations publicly and thus spoke on condition of anonymity.

The administration also is considering other moves that would place US troops closer to the front lines.

The changes Carter cited focus largely on targeting Raqqa, the militants’ declared capital in Syria, and recapturing Ramadi, the capital of Anbar province in western Iraq, which IS fighters captured in May and have successfully defended so far.

In Syria, Carter said the US will support moderate Syrian forces fighting IS militants, who have made territorial gains near Raqqa. He said the US hopes to better equip anti-IS forces, further bolster Jordan and intensify the American air campaign with additional US and coalition aircraft to target IS with heavier airstrikes.

“In the new train-and-equip effort that we described today, we will look to identify and then support capable and motivated forces on Syrian territory that are willing to take on IS,” Carter said. “We have identified some of them already. And the new approach is to enable them, train them and equip them, rather than trying to create such forces anew, which was the previous approach.”

A Defense Department program to train and equip moderate rebels to combat the Islamic State was a failure, and CIA-backed rebels fighting Assad are now under attack by Russian bombers.

In Iraq, Carter said the US is willing to provide more firepower and other support if the Iraqi government can create a motivated Iraqi force that includes ethnic Sunnis.

“We’ve given the Iraqi government two battalions worth of equipment for mobilizing Sunni tribal forces. … If local Sunni forces aren’t sufficiently equipped, regularly paid and empowered as co-equal members of the Iraqi security forces, ISIL’s defeats in Anbar will only be temporary,” Carter said.

Pentagon: American killed in raid to free Iraqis held by IS