Pentagon: American killed in raid to free Iraqis held by IS 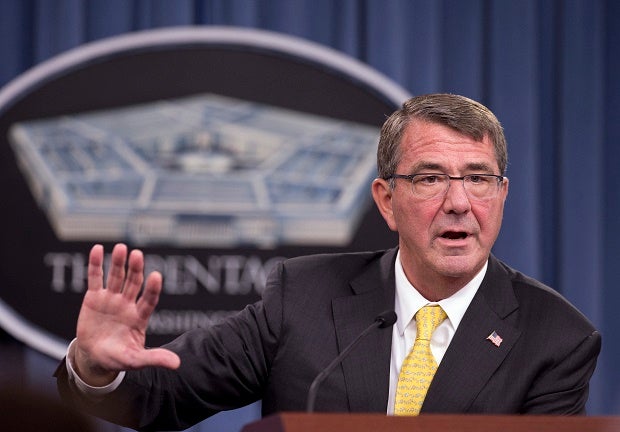 In this Aug. 20,2015 file photo, Defense Secretary Ash Carter speaks during a news conference at the Pentagon. A summer of stalemate in the effort to reclaim the Iraqi provincial capital of Ramadi, despite US-backed Iraqi troops vastly outnumbering Islamic State fighters, calls into question not only Iraq’s ability to win a test of wills over key territory but also the future direction of Washington’s approach to defeating the extremist group. AP FILE PHOTO

IRBIL, Iraq — Acting on word of an “imminent mass execution” by Islamic State militants, dozens of US special operations troops and Iraqi forces raided a northern Iraqi compound Thursday, freeing approximately 70 Iraqi prisoners in an operation that saw the first American killed in combat in the country since the US campaign against IS began in 2014, officials said.

The raiders killed and captured a number of militants and recovered what the Pentagon called a trove of valuable intelligence about the terrorist organization.

The US service member who died was not publicly identified pending notification of relatives. Officials said this was the first American combat death in Iraq since the US began its counter-IS military campaign in August 2014.

Pentagon press secretary Peter Cook said the target of the raid was a prison near the town of Hawija and that the raid was undertaken at the request of the Kurdish Regional Government, the semi-autonomous body that governs the Kurdish region of northern Iraq. He said US special operations forces supported what he called an Iraqi peshmerga rescue operation.

The peshmerga are the Kurdish region’s organized militia. The US has worked closely with them in training and advising roles, but this was the first known instance of US ground forces operating alongside Iraqi forces in combat since launching Operation Inherent Resolve last year.

“This operation was deliberately planned and launched after receiving information that the hostages faced imminent mass execution,” Cook said, adding later that it appeared the hostages faced death “perhaps within hours” and that freed hostages told authorities some had been killed at the prison recently, prior to the rescue.

Cook said Defense Secretary Ash Carter approved the US participation in the mission. Cook called it “consistent with our counter-ISIL effort to train, advise and assist Iraqi forces.”

US combat troops have rarely, if ever, participated directly in combat against IS fighters on the ground since the US mission began in 2014. The US has mostly limited its role to training and advising Iraqi and Kurdish forces, airdropping humanitarian relief supplies and providing daily airstrikes in IS-held areas of Iraq and Syria.

Cook said it was a “unique” circumstance for the American military in Iraq, although he would not say that it was the only time US forces have engaged in a form of ground combat in Iraq as part of Operation Inherent Resolve. He said it was in keeping with the parameters of the US military’s role in Iraq.

“They are allowed to defend themselves, and also defend partner forces, and to protect against the loss of innocent life,” Cook said. “And that’s what played out in this particular operation.”

In a separate statement, the Kurdish government said the operation lasted about two hours and was led by its counterterrorism forces, with support from coalition troops. It made no mention of intelligence indicating the captives were in imminent danger of being killed, as asserted by the Pentagon.

The Kurdish statement said more than 20 IS fighters were killed in the operation about four miles north of Hawija. It said 69 hostages were freed, none of whom were Kurds, and it thanked the Americans for their bravery.

The Islamic State group released a communique late Thursday dismissing what it called “a failed operation by the crusader coalition” since peshmerga fighters were not among the rescued hostages. The statement could not immediately be verified, but it was distributed on Twitter accounts with links to the group.

The circumstances in which the US military member was killed were unclear, but one US official said the American had been shot in a firefight at the scene. Cook said the service member was wounded during the mission and died after receiving medical care. Cook said four peshmerga soldiers were wounded.

Another US defense official, who spoke on condition of anonymity to provide other initial details, said the US role in the rescue mission was mainly limited to four areas: transporting Iraqi soldiers to the scene in five US special operations helicopters; providing airstrikes before and after the mission; advising Kurdish fighters and Iraqi security forces; and providing the Iraqis with intelligence for the operation.

The US defense official said the number of IS members killed was not to be made public immediately but that it was more than 10.

Cook said that of the approximately 70 prisoners freed, more than 20 were members of Iraqi security forces. He did not say who the others were.

Cook said five IS members were detained and “a number” were killed.

“In addition, the US recovered important intelligence” about IS, Cook said without elaborating.

Hawija, located about 15 miles west of the oil-rich city of Kirkuk, is home to vast wheat fields. Officials say the militant group is selling the crop to generate revenues. Iraqi forces recently moved to take the nearby city of Beiji, which is home to the country’s largest oil refinery.

Iraqi forces said Tuesday that they had driven Islamic State militants out of Beiji and were in full control of the town. But coalition officials said Thursday that the mission has not been completed.

“Beiji city is contested,” Maj. Michael Filanowski, operations officer for the US-led coalition told journalists in Baghdad on Thursday, saying it would take time to completely clear the city of booby traps and eliminate remaining resistance.

US-led coalition forces also carried out a large-scale attack on Syria’s Omar oil field as part of its mission to target the Islamic State group’s ability to generate money, Filanowski said. Airstrikes struck IS-controlled oil refineries, command and control centers and transportation nodes in the Omar oil field near the town of Deir el-Zour. Coalition spokesman Col. Steven Warren said the attack hit 26 targets, making it one of the largest set of strikes since launching the air campaign last year.

The refinery generates between $1.7 and $5.1 million per month for the Islamic State group.

Read Next
MMDA: NLEx to feel like ‘road to forever’ on Saturday
EDITORS' PICK
What to watch out for when selecting a video surveillance solution
Heads may roll at BOC, says Palace if sugar smugglers are allowed to use recycled import permits
vivo brings to the Philippines a powerful smartphone with a slimmer body, the vivo Y02s for only PHP 6,499
DOH reports increase in daily COVID-19 deaths, mostly unvaxxed
Palace: Biggest supermarkets in PH commit to sell sugar at P70 per kilo
House energy committee chair Arroyo bats for cheap electricity
MOST READ
DepEd to give teachers P5K cash allowance within first week of classes
GSIS cool to idea of lowering retirement age in PH
Alyssa Valdez to miss Creamline’s AVC Cup campaign
DOJ indicts bank officer in $2.1 billion Wirecard fiasco
Don't miss out on the latest news and information.