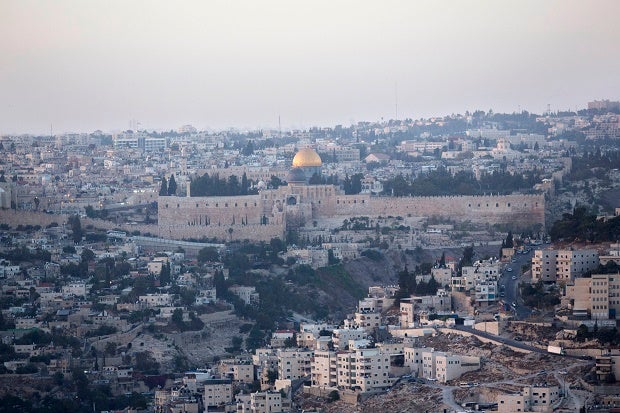 The Dome of the Rock Mosque in the Al Aqsa Mosque compound is seen in Jerusalem’s Old City, Wednesday, Oct. 14, 2015. The Israeli military began deploying hundreds of troops in cities across the country on Wednesday to assist police forces in countering a wave of deadly Palestinian shooting and stabbing attacks that have created panic across the country. AP Photo

JERUSALEM, Israel—An Israeli court on Tuesday ordered the jailing of a firebrand Islamist cleric whose group has been accused of inciting a wave of violence over Jerusalem’s Al-Aqsa mosque compound.

Fresh violence erupted in the evening, with three Palestinians attacking Israeli soldiers before being shot dead in two separate incidents in the southern West Bank.

Raed Salah, the head of the radical northern wing of the Islamic Movement in Israel, was found guilty on appeal of inciting violence at the holy site in a 2007 speech.

He has also been on the government’s radar for stoking current tensions over the compound that have led to a wave of anti-Israeli knifings, shootings and violent protests.

READ: Israel says it will not accept int’l presence in east Jerusalem

In 2007, Salah urged “all Muslims and Arabs (to) start an intifada (uprising) to support holy Jerusalem and the blessed Al-Aqsa mosque.”

His prison term is to begin November 15.

The mosque compound is in a mostly Palestinian area that was captured by Israel from Jordan in the 1967 Six Day War, and is a powder-keg for tensions in the decades-old Israeli-Palestinian conflict.

Clashes erupted there in September as an increase in Jewish visitors to the site alarmed Palestinians, who fear Israel is seeking to change rules that forbid Jews from praying there.

Netanyahu has repeatedly denied such claims.

Clashes there spiralled into a wave of stabbings and shootings that have killed nine Israelis since October 1. Fifty-nine Palestinians—around half of them attackers—and one Israeli Arab have also been killed.

And an Israeli Jew and an Eritrean have also been killed after being mistaken for attackers.

In the latest incident, the army said a Palestinian in the southern West Bank city of Hebron “approached a crossing and as soldiers checked his ID he drew a knife, attempting to stab an IDF soldier,” with forces shooting him dead before he wounded any troops.

Palestinian sources identified him as Homan Isid, 22, from Hebron.

Earlier at the Etzion junction just north of Hebron, two Palestinians attacked a soldier, one of them stabbing him in the face and moderately wounding him before forces shot the pair dead.

Amnesty International accused Israel of a series of “unlawful killings of Palestinians using intentional lethal force without justification” in east Jerusalem and the West Bank.

The rights group said that, in at least four cases, “Palestinians were deliberately shot dead… when they posed no imminent threat to life, in what appear to have been extrajudicial executions.”

Israel’s legal system had already been dealing with claims of excessive use of force.

Attorney General Yehuda Weinstein stressed Monday that “using firearms… is permissible only when there is a real threat to the lives or security of police or others, and there is no other way to prevent that damage.”

Writing in response to claims raised by Adalah, an NGO defending the rights of Israeli Arabs and Palestinians, Weinstein said he ordered an examination of a number of instances the group mentioned.

Meanwhile on Tuesday, 76-year-old American Israeli Richard Lakin succumbed to his wounds two weeks after he was shot in the head and stabbed in the chest on a Jerusalem bus.

His son Micah Avni Lakin said he had been a big fan of social media, where young Palestinians have incited attacks, uploading videos and sharing the hashtag #Jerusalemintifada.

“To be able to put on Facebook or Twitter specific instructions on how to slice somebody’s chest straight open and cut their intestines, just like was done to my father… is just completely and utterly unacceptable,” said Lakin.

Before he died Lakin’s family put his name on a petition of 20,000 Israelis backing a lawsuit an Israeli NGO filed against Facebook for failing to remove pages that encourage the killing of Jews.

The company said the suit was “without merit” and urged people to “use our reporting tools if they find content that they believe violates our standards so we can investigate and take swift action.”

The surge in violence has prompted an intense diplomatic drive to douse tensions that many fear herald a third Palestinian intifada.

However, these efforts have already run into trouble.

Netanyahu called government members to order Tuesday after Deputy Foreign Minister Tzipi Hotovely said it was her “dream to see the Israeli flag flying” over Al-Aqsa, which is sacred to both Muslims and Jews.

He reacted swiftly, with his office issuing a statement repeating his promise to maintain the status quo that allows Muslims to pray at the site and Jews to visit but not pray.

One of the measures agreed last week was the installation of cameras at the compound.

However, Israel and Jordan, which has custody of the site, have locked horns over who will control the installation.

Read Next
Russia pounds Syrian rebels, then reaches out to opposition
EDITORS' PICK
Look Through: The fate of impounded stray dogs
Palace warns sugar hoarders after raid on Pampanga warehouse
What to watch out for when selecting a video surveillance solution
Unleash the photographer in you this World Photography Day with vivo smartphones
House energy committee chair Arroyo bats for cheap electricity
Metro Manila’s COVID-19 cases on downward trend, but surge not over — OCTA
MOST READ
Man abducted in Batangas gasoline station, found dead in Quezon
LOOK: Miel Pangilinan dazzles in glittery pre-debut shoot
PNP bars US legislators’ visit to De Lima due to lack of authority from court
WATCH: Rick Astley re-creates ‘Never Gonna Give You Up’ music video 35 years later
Don't miss out on the latest news and information.