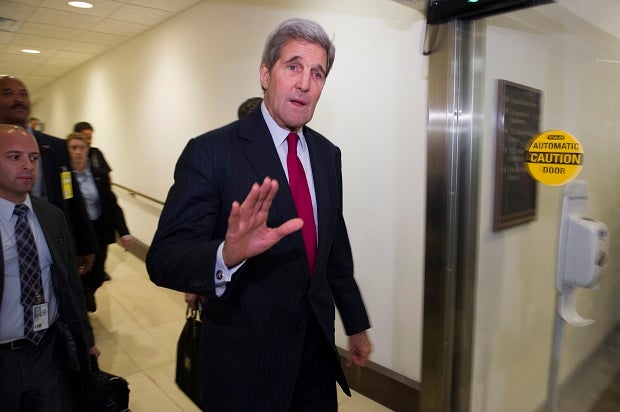 Secretary of State John Kerry declines to speak with reporters as he leaves the Capitol in Washington, Tuesday, Oct. 27, 2015, after briefing the Senate Foreign Relations Committee on the Administrations response to the Syrian conflict, in a closed session. AP Photo

After talks on the crisis in Syria in Austria on Friday, Kerry will fly to Kyrgyzstan, Uzbekistan, Kazakhstan, Tajikistan and Turkmenistan—returning on November 3.

State Department spokesman John Kirby said this would be “the first ever visit by a US secretary of state to all five central Asian republics in the same trip.”

In the Kyrgyz capital Bishkek, Kerry will witness the opening of a new chancery at the US embassy and a new campus of the American University of Central Asia.

The main political day of the trip will be in the Uzbek city of Samarkand, where Kerry will meet his counterparts from all five former Soviet republics.

Kirby said this new diplomatic format would be known as the “C5+1” and “allow the secretary and ministers to discuss regional and global opportunities as well as challenges.”

In Astana, Kerry will hold the fourth meeting of a US-Kazakhstan strategic dialogue and deliver a speech on Central Asia’s role in the world.

And in Ashgabat and Dushanbe, he will meet senior officials.

Since the fall of the Soviet Union, the newly independent republics of Central Asia have had differing fates, though their peoples have largely suffered under authoritarian rule.

The United States has been cautiously critical of rights abuses by the local regimes because they need to assure northern supply lines to US troops in neighboring Afghanistan.

The countries also have a shared interest in combating Islamist extremism, but Washington is a side player in the subtle play for influence between China—the region’s main economic partner—and Russia

Read Next
Defense secretary says US is retooling fight against IS
EDITORS' PICK
Metro Manila to remain under COVID Alert Level 2 until December 15
IATF tightens border control, suspends entry of fully vaxxed nationals from ‘green’ countries
Villar Group gears up for AllValue Shopping Party on Dec. 3; around P 1-million promos and discounts up for grabs
Duterte open to making jabs mandatory; Cabinet mulls ‘pressuring’ the unvaccinated
Legarda: Ending Violence Against Women, a cause for all
A delightful blessing!
MOST READ
Quiboloy warns of ‘much worse than Omicron virus’ if his ‘persecution’ is not stopped
Omicron poses ‘very high’ global risk, countries must prepare–WHO
Marcoleta defends pol ads on ABS-CBN
Bongbong Marcos’ conviction in tax case not a crime involving moral turpitude — lawyer
Don't miss out on the latest news and information.