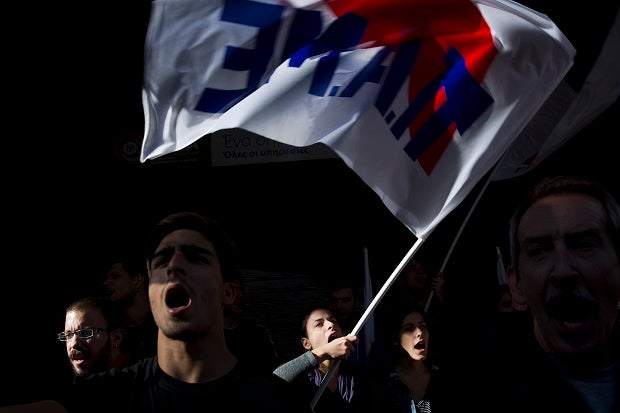 Protesters from communist-affiliated party PAME wave a flag as they chant anti-austerity slogans outside the Labor Ministry in Athens, Thursday, Oct. 15, 2015. About 200 demonstrators blocked the entrance to the ministry to protest proposed changes to Greece’s pension and social security system, as part of austerity measures demanded by Greece’s international bailout creditors. AP

Lawmakers will vote on a new austerity reform package to penalize early retirement and expand a widely hated property tax, among other cost-cutting commitments made for a 2 billion-euro ($2.3 billion) loan installment.

The loan is part of a third major bailout agreement with the eurozone lenders, worth 86 billion euros ($98 billion). That July deal saw Tsipras abandon a pledge to end austerity and alienate a large section of his Syriza party, forcing him to the polls for a second time in eight months.

Greece is now racing to overhaul its troubled pension system and impose a barrage of new cutbacks, struggling to keep pace with bailout targets as it seeks rescue funds for its banks. It also wants improved bailout repayment terms as its massive national debt is set to exceed 190 percent of annual output next year.

The additional austerity measures are expected to keep the country in recession over the next two years and unemployment above 25 percent.

Tsipras, however, faced little dissent from his party or right-wing coalition partners during a parliamentary debate on the bill that started at committee level Tuesday. His coalition controls 155 seats in the 300-member parliament, with support from at least 151 required for the bill to pass.

A Communist-backed labor union and a union representing civil servants are planning protests in central Athens Friday. Six opposition parties in parliament have all pledged to vote against the bill.

A breakaway party formed by politicians who split with Tsipras’ party during the summer failed to get elected to parliament in the September election.