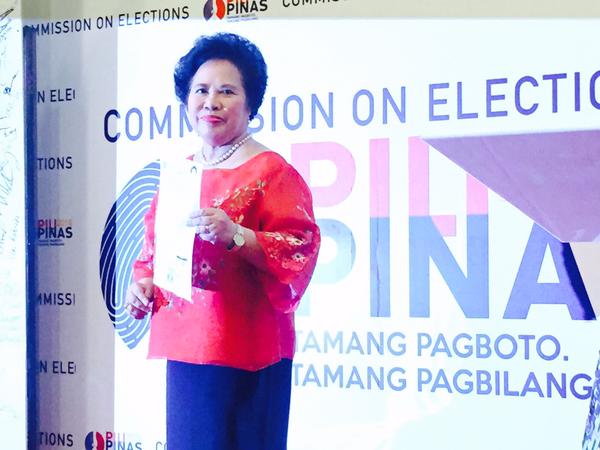 After filing her certificate of candidacy for president, Santiago said she does not have to reconcile her rulings when she was judge of the Quezon City RTC with her decision to run with Marcos.

“I was correct [with my decisions]. The truth will always be the truth. Justice will always be justice… Life doesn’t have to be a constant straight line from one end to another,” Santiago told reporters at the Commission on Elections headquarters in Intramuros, Manila.

“Times change. Your ideologies are different from those of your parents. We always have to adjust with the times,” she added.

Asked about the human rights violations committed during the Marcos regime, Santiago said it was not as if the late dictator gathered all his family members and decided to implement martial law.
“They did not agree as a family to sit down and say, ‘let’s set up curfew, let’s regulate firearms,” she said, noting that the martial law was not a result of familial decision but of a “policy decision of the executive branch and Marcos’ advisers.”
Santiago said her tandem with Marcos was a “unique phenomenon” as they came from different parties—she will run under her People Reform’s Party, while the latter is a Nacionalista stalwart.

“This phenomenon is unique not only for me but also for my running mate. It’s a new development—two people from different parties are running together,” she said.

After posting several hints on social media last week, Santiago formally announced that she will seek the presidency for the third time on Monday. She said the Philippines will be “much better if I become president in the near future.”

On Thursday, the feisty senator confirmed that Marcos is her running mate, saying that it was a mutual decision of both camps.

Santiago first ran for president in 1992, but lost to former president Fidel V. Ramos in a hotly contested race. She also joined the 1998 presidential derby. IDL