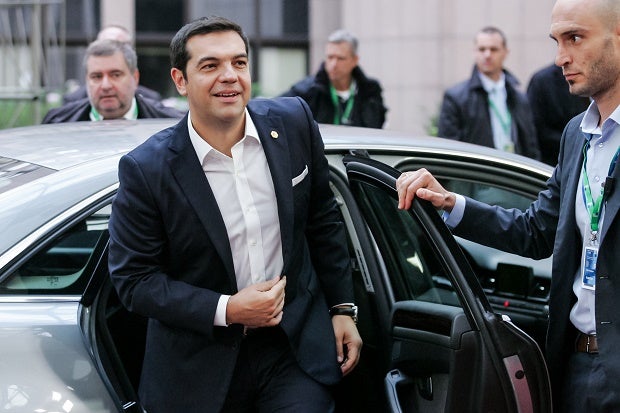 Greece’s Prime Minister Alexis Tsipras arrives for an emergency EU heads of state summit on the migrant crisis at the EU Council building in Brussels on Wednesday, Sept. 23, 2015. AP Photo

ATHENS, Greece—Greek Prime Minister Alexis Tsipras’ new left-wing government took office on Wednesday with a mandate to tackle painful economic reforms as well as a growing migration crisis that has shaken the EU.

Tsipras barely had time to see his cabinet sworn into office before flying to Brussels for an emergency migration summit, a day after EU ministers forced through a controversial deal to relocate 120,000 refugees, angering several member states in the process.

“We must share the burden,” Tsipras said in Brussels, after complaining that Europe had failed to give adequate support to Athens.

The new Greek cabinet is almost a carbon copy of the previous government headed by the 41-year-old premier, who resigned in August after he losing his majority following a rebellion by hardliners in his Syriza party who were angered by the economic reform-and-rescue deal.

One new arrival raised eyebrows—a lawmaker from junior coalition partner, the nationalist Independent Greeks (ANEL), who has made repeated anti-Semitic comments on social media, and was appointed junior works minister.

Dmitris Kammenos sparked uproar earlier this year by comparing the EU to Auschwitz, and is also accused of peddling a conspiracy theory claiming that 2,500 Jews employed in New York’s World Trade Centre “skipped work” on the day of the September 11, 2001 attacks.

Outrage had mounted over his nomination throughout the day and the government announced late Wednesday that he had stepped down from the post less than 24 hours after being appointed.

Tsipras’ decision to keep the same team that negotiated the July cash-for-reforms deal, the country’s third bailout in five years, has sent a signal to international creditors.

According to state news agency ANA, Chouliarakis said 61 percent of Greece’s bailout obligations had been carried out.

He said Greece faced “mild” recession this year, and that Athens must reach a deal on debt relief after it undergoes its first bailout reform audit later this year.

EU economic affairs commissioner Pierre Moscovici expressed delight earlier on Wednesday to have Tsakalotos back at the post.

“Happy to continue working together to help Greece,” Moscovici tweeted.

The liberal daily Kathimerini said Wednesday that Tsipras had been careful to reward loyal Syriza cadres who supported him against the hardliners.

“Tsipras’ basic criterion was to keep the balance in his party… and reward those who stood at his side on the bailout issue,” the daily said.

Several members of the cabinet said their first order of business was to revive the Greek economy, which is still bound by capital controls imposed by Tsipras in June to avert a deposit run.

“Our goal is recovery and reconstruction,” deputy prime minister Yiannis Dragasakis told reporters before the ceremony.

“We have the prerequisites to overcome the difficulties,” he said, adding that the government wanted to leave “left-wing imprints” at the end of its term.

Senior Syriza figures also insist they will propose alternative social-minded policies to mitigate some of the toughest bailout cuts.

Nikos Kotzias, the former senior Communist who clashed with EU peers over the Ukraine crisis, returns to the foreign ministry, and the key migration portfolio remains in the hands of Ioannis Mouzalas, who as interim minister before the election helped ease pressure on Greek islands swamped by refugee arrivals.

The new government has 16 ministers and 30 deputy ministers, but only four women including the spokeswoman.

The IMF said it was looking forward to working with the new government.

“We welcome the completion of the electoral process in Greece and look forward to working with the new government on the policies needed to put Greece on a path for sustainable growth,” the global lender said in a statement.

But the clock is ticking, with a review due in late October by the lenders on whether Athens is abiding by the reform program. At stake for the new government will be the release of a new three-billion-euro ($3.3-billion) tranche of aid.

In his second mandate, Tsipras also hopes to strengthen Syriza’s left-wing credentials by fighting the systemic corruption and cronyism that has tainted Greek political life for decades, while tackling the migrant crisis with more efficiency and humanity.

Debt-strapped Greece has been the first port of call for some 310,000 refugees from war and persecution in the Middle East and elsewhere this year, but almost all have moved on to seek a new life in more prosperous economies to the north.

Some 4,000 migrants riding flimsy vessels from Turkey arrive on the Greek islands every day.