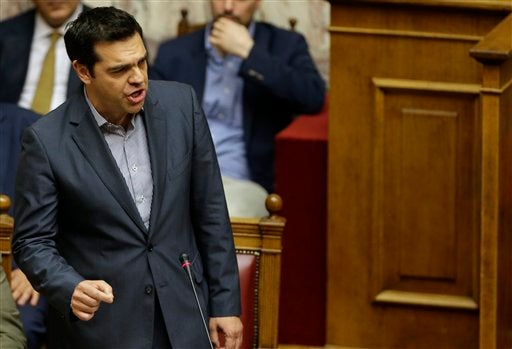 ATHENS, Greece—Greek Prime Minister Alexis Tsipras announced his resignation and called for snap elections on Thursday, as he went on the offensive to defend the country’s massive bailout after it triggered a rebellion within his own hard-left party.

Tsipras did not give a date for the new polls but they are expected to be held on September 20, the state news agency ANA said, citing government sources.

In a live televised address to the nation, the 41-year-old premier said he had worked hard to secure the best possible rescue package for his country, but he now needed a clear new mandate from the Greek people after it cost him his parliamentary majority.

“Now that this difficult cycle has come to an end, I wish to submit to your judgment all that we have done,” Tsipras said, before meeting President Prokopis Pavlopoulous to formally hand in his resignation.

The move leaves Greece in the hands of a caretaker government until the vote.

Tsipras’s announcement came on the same day the debt-crippled country received its first 13 billion euros in bailout cash on Thursday, effectively starting the mammoth rescue package agreed last month, and worth around 86 billion euros ($96 billion) over the next three years.

The money arrived just in time to allow the Greek government to make a key debt repayment of 3.4 billion euros to the European Central Bank.

But the hard-won bailout—which kept Greece in the EU but comes with painful demands for spending cuts and tax hikes—has divided Tsipras’s Syriza party after it stormed to power in January on an anti-austerity platform.

Greek MPs on Friday approved the new rescue deal—the country’s third in five years—but 43 of Syriza’s 149 MPs either rebelled or abstained from the vote, forcing the premier to rely on the opposition for support.

Dozens of Syriza MPs had already revolted in two previous votes on the bailout.

In the face of such a large-sale rebellion, Tsipras, who remains popular with the electorate, had been widely expected to call snap polls in a bid to regain office with a stronger hand.

The early vote move is the latest gamble by the charismatic young premier, who successfully persuaded Greeks to reject creditors’ tough reforms in a referendum last month, only to adopt them at a eurozone summit a week later.

Jeroen Dijsselbloem, the Dutch finance minister who chairs the so-called Eurogroup of eurozone finance ministers, warned that the early elections must not delay Greece from implementing the reforms it has agreed in exchange for the cash.

“It’s crucial that Greece maintain its commitments to the Eurozone,” Dijsselbloem said.

“The Greek Prime Minister Tsipras’s move to step down and call snap early elections on 20 September could elevate program implementation concerns and, potentially, puts future official sector disbursements at risk,” it said in a statement.

But Martin Selmayr, chief of staff to European Commission head Jean-Claude Juncker, was more positive. “Swift elections in Greece can be a way to broaden support for ESM stability support program just signed by Prime Minister Tsipras on behalf of Greece,” he tweeted ahead of the vote announcement, referring to the EU bailout fund.

Greece’s creditors are expected to welcome Tsipras’ bid to bolster his hand.

The premier’s resignation “is good economic news for Greece and for Europe,” said Marcel Fratzscher, head of economic research institute DIW and an advisor to Germany’s economics minister Sigmar Gabriel.

“This will improve the prospects for a successful third program and thereby for more economic growth,” he said, though he warned of the short-term risks of a “political vacuum.”

The all-clear to unblock the first payment of rescue funds came after the bailout was approved by European parliaments, including Germany’s Bundestag on Wednesday.

The decision unlocked 13 billion euros for Athens to service its debts and set aside another 10 billion euros to recapitalize the country’s cash-starved banks.

Ahead of Tsipras’ announcement of his resignation, Greek stocks closed lower on Thursday in the face of the political uncertainty, falling 3.5 percent. Frankfurt and Paris were down by 2.0 percent.