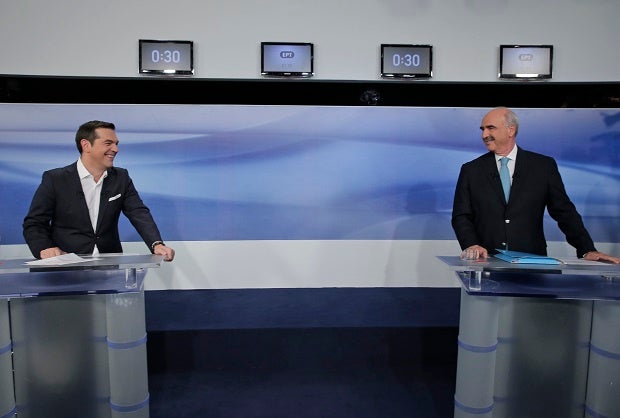 ATHENS, Greece—The two main candidates for the Greek premiership in this weekend’s snap election on Monday questioned the EU’s migration policy and said they would seek ways to amend the country’s unpopular new economic bailout.

In a televised debate, leftist leader and former PM Alexis Tsipras said military action against people smugglers would not work in Greek waters.

“Operations of a military nature cannot be carried out in Greece’s case, you will hit innocent refugees, not smugglers… the boats come without smugglers,” Tsipras said.

His conservative rival Evangelos Meimarakis said that “illegal migrants” should be sent back to their country of origin.

EU member states earlier Monday approved plans for military action against people smugglers in the Mediterranean, seizing and if necessary destroying boats to break up the networks operating out of Libya.

READ: One child among the three migrants drowned off Greece

Overwhelming Greece’s Aegean Sea islands, migration has turned into a major issue ahead of the September 20 election, a campaign which had previously been dominated by the country’s six-year economic crisis.

Tsipras and Meimarakis went into their second debate looking for an edge in the neck-and-neck race between their Syriza and New Democracy parties.

The debate was more lively than the first round on September 9 that also included another five parties.

He is asking for a second chance to put a human face on the unpopular 86-billion-euro ($97-billion) bailout he brokered with Greece’s EU creditors in July.

“I could say the deal we brought is a living organism,” he said, listing a number of “open issues” including debt reduction, privatizations, labor relations, and how to deal with non-performing bank loans.

“We will apply the deal, the section which we are obliged to apply, as fast as possible, and we will fight on major issues that remain open, for the benefit of the people,” Tsipras said.

Meimarakis, 61, said his party intended to apply the terms of the bailout for a year before seeking to amend some of the terms.

“The bailout includes reforms, restructuring, privatizations…we began them, we believe in them, we can do them,” he said.

A Metron Analysis poll for TV station Antenna on Monday showed the two parties in a dead heat race, each attracting 24.6 percent of the popular vote.

Metron Analysis found 70 percent had given a thumbs down to Tsipras’ government record, compared to a 76-percent approval rate in February.

Evidently intent to fight Tsipras over every inch of ground, the taller Meimarakis complained during the debate that the balanced side-by-side shots of the two leaders were stealing his height advantage over his rival.

Meimarakis was clearly more on edge in Monday’s debate, and spent much of the time sidestepping questions in order to criticize Tsipras’ previous answers.

Tsipras came to power in January promising to eliminate austerity, but was forced to accept a rescue package including more cuts, and ultimately resigned in August after a revolt by hardline eurosceptics wiped out his parliamentary majority.

He now pledges, if re-elected, to continue the fight against poverty and corruption and to force the rich to pay their taxes.

“I never want you to be prime minister again,” he told Tsipras. “You brought destruction to the country…we never had so many ills in such a small period of time.”

Nevertheless, Meimarakis says he will invite Tsipras to form a unity government and a multi-party team to negotiate with the country’s creditors on how to lift the country out of crisis.

Tsipras has rejected any possibility of working with the conservatives whom he accuses of helping to bankrupt the country through nepotism and corruption over the last 40 years.

“The dilemma on Sunday is simple,” he said. “Do we want the Greece of the few or the many?”