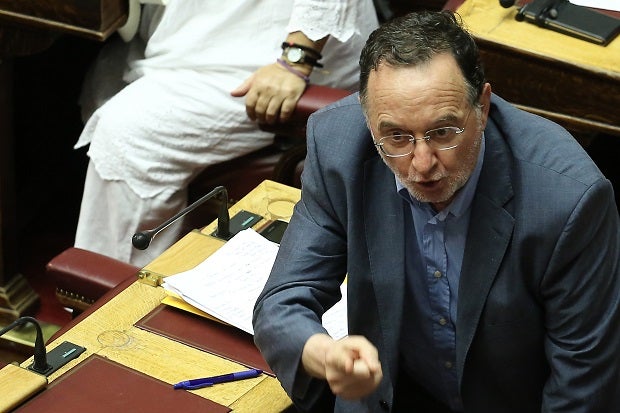 Lawmaker Panagiotis Lafazanis speaks during a parliamentary session in Athens, early Friday, Aug. 14, 2015. The Greek government defended its new bailout program in tumultuous parliamentary sessions as it faced a rebellion in the governing Syriza party ahead of a vote on the deal. Former energy minister Lafazanis, a Syriza hardliner who lost his cabinet position last month after voting against another bailout-related bill, took a step toward a full split with his party Thursday, joining a group of another 12 left-wing politicians announcing they will create a new anti-bailout movement. (Photo by Yannis Liakos/AP)

ATHENS, Greece — Greek lawmakers are continuing a debate in parliament to approve a massive new bailout deal after repeated delays over procedure and dissent within the governing left-wing Syriza party caused the session to last through the night.

The draft deal for the 85 billion euro ($93 billion) package was to be voted at about 8:30 a.m. (0530GMT) Friday — hours before finance ministers from the eurozone were to meet in Brussels to study the agreement.

Prime Minister Alexis Tsipras will have to rely on support from opposition parties to gain approval for the measures that add to sweeping new austerity measures demanded for the new three-year program.

Dissenters in his own party angrily challenged the government, accusing it of reneging on promises it made before winning elections last January.

“I feel ashamed for you. We no longer have a democracy … but a eurozone dictatorship,” prominent party member Panagiotis Lafazanis said ahead of the vote.

The revolt by dissenters who back returning to a national currency could trigger early elections — a risk that will be gauged by the level of dissent in the Friday vote.

Tsipras’ radical left party won elections in January on promises to repeal similar budget austerity imposed in return for Greece’s two previous bailouts. His about-face, agreeing this week to tough terms with creditor negotiators from the European Central Bank, European Commission and International Monetary Fund, has led to outrage among hardliners that now threatens to split the party.