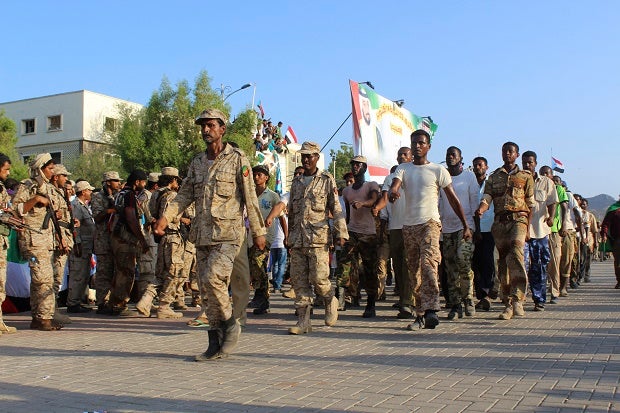 Southern Yemeni demonstrators march for the 52nd anniversary of the beginning of Yemen’s armed struggle against the occupation by Great Britain, during a ceremony in Aden, Yemen, Wednesday, Oct. 14, 2015. The crowds calling for independence from the north gathered despite threats from al-Qaida’s Yemen branch against the rally that were circulated on social media. AP

SANAA, Yemen — Five Yemeni civilians and 12 fighters from the forces fighting Shiite rebels were killed this month by rebel-planted mines in a central province, medical and security officials from the anti-rebel side said Wednesday.

The officials said that the rebels, known as Houthis, planted the mines before they were pushed out from their last outpost in Marib province last week.

Since taking full control over the Marib province, the military and allied forces have been securing their presence and prepping for a large-scale operation to take over Jawf province to the north, which lies on the road to the Houthis’ stronghold of Saada, according to military officials. Reinforcements from the Saudi-led coalition, including troops and weaponry, were also sent across the border and then into Marib in the past three days, according to the officials.

In Taiz province, medical and security officials say 13 Houthis and allied fighters were killed in airstrikes by a Saudi-led coalition, while fierce clashes were ongoing near the provincial capital’s airport. Also in the city of Taiz, three individuals guarding a high-ranking military official were killed when a Houthi rocket landed near his convoy.

Nine Houthi fighters were killed in airstrikes by the Saudi-led coalition in Bayda province, according to independent security officials and witnesses.

The officials spoke on condition of anonymity because they were not authorized to talk to the media while witnesses declined to give their names for fear of reprisals.

Yemen has been embroiled in fighting that pits the Shiite Houthis and forces loyal to a former president against the Saudi-backed and internationally recognized government, and allied forces. The Saudi-led coalition has been carrying out airstrikes against the rebels and their allies since March, fearful of Iranian influence spreading across the Arabian Peninsula. Iran backs the rebels but denies any military support.

Also Wednesday, hundreds of southern Yemeni demonstrators rallied in the southern port city of Aden, calling for independence from the north. The crowds gathered despite threats from al-Qaida’s Yemen branch against the rally that were circulated on social media. Al-Qaida opposes southern independence activists, whom it views as secularists.

The demonstration falls on the 52nd anniversary of the beginning of Yemen’s armed struggle against the occupation by Great Britain, a day that has become a rallying point for southern secessionists.

Once-independent South Yemen was united with the north in 1990. An attempt to break away from the union in 1994 was ruthlessly crushed by the army of former President Ali Abdullah Saleh.