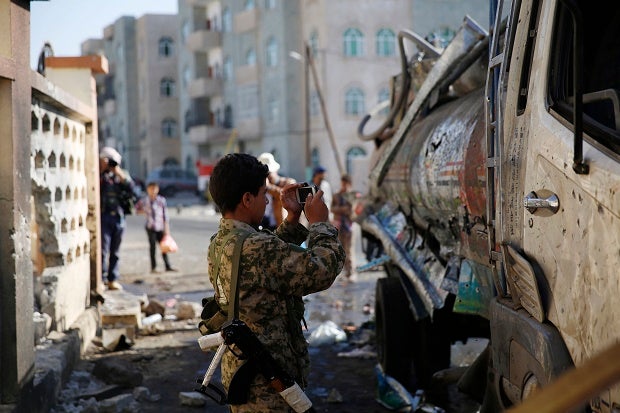 A Shiite fighter, known as a Houthi, uses his mobile to take pictures of a truck damaged at the site of a Tuesday night suicide bomb attack next to a mosque in Sanaa, Yemen, Wednesday, Oct. 7, 2015. The attack killed seven people and wounded three. Islamic State militants claimed responsibility for the blast online. AP

UNITED NATIONS — Shiite rebels in conflict-torn Yemen have agreed to stop fighting, the United Nations said Wednesday, and now a UN envoy is going to the region to see how Yemen’s government will respond.

UN spokesman Stephane Dujarric said the rebels, known as Houthis, accepted a UN Security Council resolution that calls for an end to violence, withdrawal of their forces from all areas they have seized, and a halt to undermining the political transition in the impoverished Arab nation.

The April 14 resolution imposed an arms embargo on Houthi leaders and their key supporters, former President Ali Abdullah Saleh and his son.

Dujarric said the UN special envoy for Yemen, Ismail Ould Cheikh Ahmed, who has been trying to end the conflict, welcomed the Houthis’ latest statements accepting the resolution.

Dujarric said Cheikh Ahmed believes the government, the Houthis and their allies should accept a UN invitation to join peace talks based on Security Council resolutions, an initiative by the Gulf Cooperation Council and the country’s National Dialogue.

He said Cheikh Ahmed will be returning to the region on Thursday to try “to gel what is being said into something a little more concrete.” He will also seek the support of the government, the Houthis and regional powers for peace talks, Dujarric said.

Several previous attempts to end the conflict have failed, and it has proven nearly impossible to arrange a humanitarian pause to deliver desperately needed aid.

The fighting has killed more than 4,000 people, leaving the Arab world’s poorest country in the grip of a humanitarian crisis and on the brink of famine.

A Saudi-led and US-backed coalition began launching airstrikes against the Houthis and their allies on March 26, shortly after Hadi fled to Saudi Arabia during a rapid rebel advance on the south. Pro-government troops, backed by the coalition of Sunni Arab nations, have regained strategic ground from the rebels, including the southern port of Aden.

In addition to halting the fighting, the April 14 resolution calls on all Yemeni parties, especially the Houthis, to stop actions that are exclusively the authority of the government and “refrain from any provocation or threats to neighboring states,” including by acquiring missiles and stockpiling weapons in another country.

25 dead after suicide bombing at mosque in Yemen’s capital