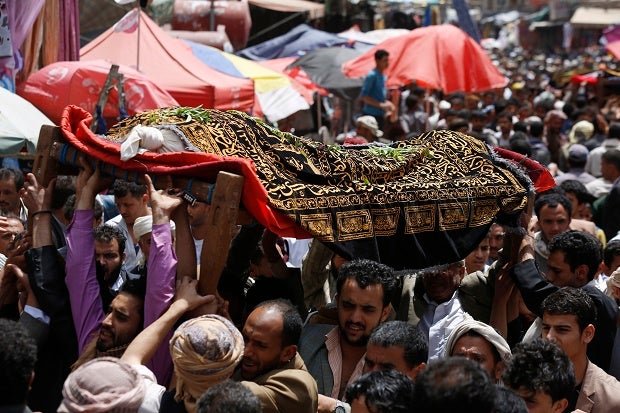 People carry the body of a Yemeni who was killed in a Saudi-led airstrike during the funeral, in the Old City of Sanaa, Yemen, Saturday, Sept. 19, 2015. The overnight airstrikes against Yemen’s Shiite rebels and their allies have killed almost 30 people, including civilians, in the capital Sanaa, security and medical officials there said Saturday. The coalition’ airstrikes hit an apartment building in the center of the capital, a UNESCO world heritage site, killing a family of nine, the officials who remain neutral in the conflict that has divided Yemen’s security forces said. AP

Security and medical officials, who remain neutral in a conflict that has splintered the country, said the airstrikes hit a building in the Sanaa neighborhood of al-Hasba, destroying it and also damaging nearby buildings.

The house that was hit stood next door to a rebel-controlled building, which appeared to be the intended targeted, they said.

Yemen has been torn by a ferocious war pitting the Shiite rebels known as Houthis and forces loyal to a former president against fighters who support exiled President Abed Rabbo Mansour Hadi, as well as southern separatists, local militias and Sunni extremists.

The conflict escalated in March when the Saudi-led, US-backed coalition launched an air campaign against the Houthis and their allies.

The war has so far killed over 2,100 civilians, according to the United Nations.

All officials spoke on condition of anonymity because they are not authorized to talk to reporters.

Why It Matters: The Saudi-led intervention in Yemen