Why It Matters: The Saudi-led intervention in Yemen | Inquirer News
Close
menu
search

Why It Matters: The Saudi-led intervention in Yemen 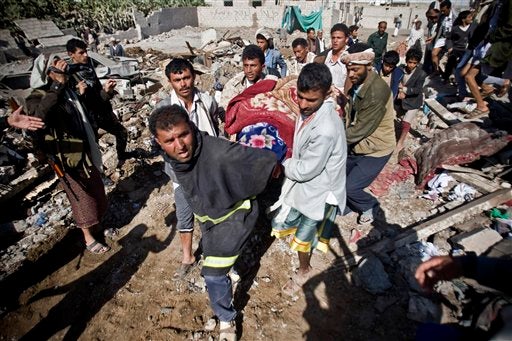 People carry the body of a woman covered with a blanket from under the rubble of houses destroyed by Saudi airstrikes near Sanaa Airport, Yemen, Thursday, March 26, 2015. Saudi Arabia launched airstrikes Thursday targeting military installations in Yemen held by Shiite rebels who were taking over a key port city in the country’s south and had driven the embattled president to flee by sea, security officials said. AP

Airstrikes by Saudi Arabia against Iran-backed Shiite rebels in turbulent Yemen have added a regional dimension to the conflict in the Arab world’s poorest country. Five reasons why the world should care about what is happening there:

Yemen is home to al-Qaida in the Arabian Peninsula, or AQAP, which Washington has viewed as the most lethal branch of the global network founded by Osama bin Laden. AQAP has been linked to several attempted attacks on the U.S., including the underwear bomb plot of December 2009, and it claimed the January killings at the offices of the French satirical weekly Charlie Hebdo.

President Abed Rabbo Mansour Hadi was a close U.S. ally in the fight against al-Qaida, but he fled Yemen on Wednesday as his forces were routed by the Shiite rebels, known as Houthis, and loyalists of former President Ali Abdullah Saleh.

The Houthis, who control the capital Sanaa and nine of Yemen’s 21 provinces, are sworn enemies of al-Qaida, but they are also hostile to the U.S. Their slogan is “God is great, death to America, death to Israel, damnation to the Jews, victory for Islam.”

The U.S. drone campaign against AQAP is now in disarray. About 100 U.S. military advisers withdrew last weekend from al-Annad air base, where they had been leading the campaign. The Houthis have overrun the base, which was hit in Thursday’s air raids.

For more than a decade, the CIA and the military’s Joint Special Operations Command have carried out parallel targeted killings in Yemen, and the U.S. military has trained elite Yemeni counterterrorism units. In September, President Barack Obama cited Yemen as a success story when he detailed his strategy against the Islamic State group in Iraq and Syria, which involves targeted U.S. strikes on militants with the cooperation of friendly ground forces.

The loss of Hadi and the splintering of his military leave the U.S. with fewer allies on the ground gathering intelligence and launching raids. The rise of the Shiite Houthis has also helped al-Qaida rally support among Yemen’s Sunni majority.

The airstrikes have transformed Yemen into another arena for the regional struggle between Saudi Arabia and Iran, which also back opposite sides in Syria’s civil war.

The Houthis generally are a part of the Zaydi Shiite minority, which accounts for about a third of Yemen’s population. Shiite-dominated Iran supports the rebels and has condemned the airstrikes, but the Houthis deny receiving arms from Tehran.

The Gulf Cooperation Council — made up of Saudi Arabia, Kuwait, Bahrain, the United Arab Emirates, Qatar and Oman — backs Hadi, and all but Oman are taking part in the intervention in Yemen. Senior Egyptian security and military officials say Saudi Arabia and Egypt will lead a ground operation against the rebels and their allies after the airstrikes.

The turmoil has allowed supporters of the Islamic State extremist group to gain a foothold in Yemen, where IS-inspired militants killed more than 130 people last week in suicide attacks on two Houthi-linked mosques.

Such attacks, along with the Saudi intervention, could add a toxic sectarian dimension to what until now has mainly been a political conflict. An openly sectarian war like those in Syria or Iraq would likely attract foreign fighters and external support for the rival sides, resulting in an even bloodier and more intractable conflict.

Obama authorized the transfer of Yemeni detainees from the Guantanamo Bay prison nearly two years ago amid high hopes that Hadi could maintain security in the country. The transfer never took place, however, because AQAP has thrived amid the instability.

The Obama administration said recently that the U.S. is not considering sending any of the Yemeni detainees back to their homeland for the foreseeable future because of volatile conditions. That could make it even harder for Obama to make good on his 2008 campaign promise to close the U.S. military prison for terrorism suspects. Nearly two-thirds of the remaining 122 Guantanamo detainees are from Yemen.