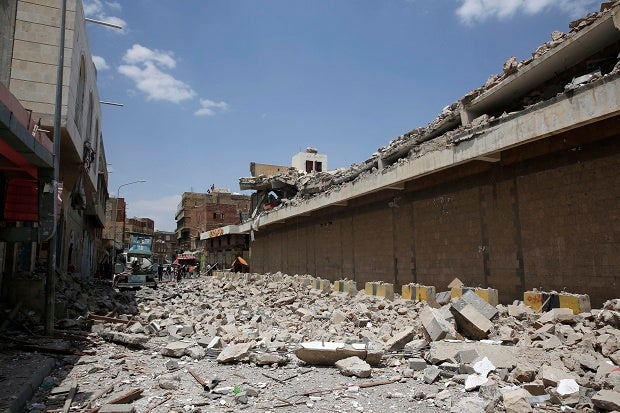 The Houthi-controlled headquarters of the Yemeni army destroyed by Saudi-led airstrikes in Sanaa, Yemen, Wednesday, Sept. 16, 2015. Yemen’s Cabinet was back in the country after months spent in self-imposed exile in Saudi Arabia and was working Wednesday out of the southern port city of Aden, a government spokesman said. The Houthis still control Sanaa, and are resisting a push by pro-government forces along several front lines around the country. AP

SANAA, Yemen — Yemeni security officials say three explosions have hit the southern port city of Aden, including one blast that struck a hotel where Cabinet members and other government officials are staying.

The security officials, who work for Yemen’s internationally recognized government, say there are casualties in Tuesday’s explosions but they had no specifics or details.

They say one explosion rocked Hotel al-Qasr, where the prime minister and officials reside, while the other two hit the residence and headquarters of troops from the United Arab Emirates. The Emiratis are part of the Saudi-led coalition that is battling Yemen’s Shiite rebels.

Witnesses say the hotel is on fire and that there are ambulances at the scene.

All officials and witnesses spoke on condition of anonymity because they aren’t authorized to talk to reporters.

25 dead after suicide bombing at mosque in Yemen’s capital