Oregon gunman killed himself after police wounded him 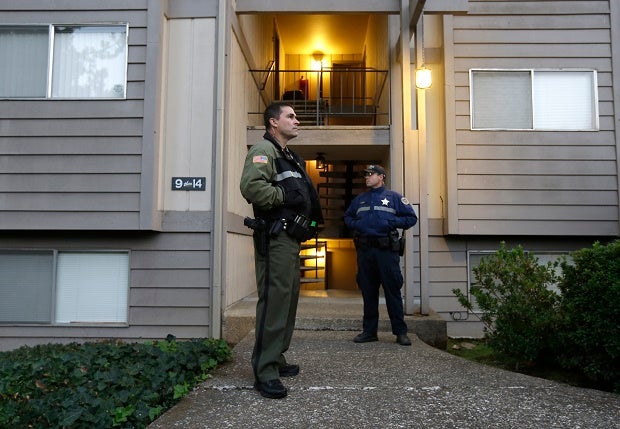 In this Oct. 2, 2015, file photo, Douglas County Deputy Sheriff Greg Kennerly, left, and Oregon State Trooper Tom Willis stand guard outside the apartment building where alleged Umpqua Community College gunman Chris Harper Mercer lived with his mother in Roseburg, Ore. The deadly shooting last week has an eerie parallel with the massacre at Sandy Hook Elementary School that killed 20 pupils and six adult staff members in 2012. Like Adam Lanza, the gunman in the Connecticut massacre, Christopher Harper-Mercer was living a mostly solitary life with a mom who shared his fascination with firearms. AP FILE PHOTO

ROSEBURG, Oregon — The gunman who fatally shot nine people at an Oregon community college last week killed himself in front of his victims after two police officers wounded him, authorities said Wednesday.

When two plainclothes detectives spotted Christopher Harper-Mercer in the doorway of a campus building, he fired at them, and the officers quickly returned fire. The killer then went back inside and shot himself in a classroom where many of his victims lay dead and wounded, a prosecutor told a news conference.

It was authorities’ most detailed account yet of the gunman’s death. Previously, they had said only that the 26-year-old attacker killed himself after a shootout.

The detectives arrived within minutes of the first reports of gunfire at Umpqua Community College.

Seconds later, the officers “both felt they had a good target,” Douglas County District Attorney Rick Wesenberg said. Two of their bullets hit a wall. A third struck Harper-Mercer on the right side.

The attack in this rural timber town was the worst mass shooting in Oregon history. Eight students and a teacher died. Nine others were wounded.

A private memorial has been held for Lawrence Levine, who was killed while teaching the class. Another private service was held Wednesday for 44-year-old Sarena Dawn Moore of Myrtle Creek. More funerals are scheduled through Saturday.

President Obama plans to travel to Roseburg on Friday to meet with victims’ families. Obama’s calls for stricter gun laws in the wake of the shootings did not sit well with many people in this conservative region, where gun ownership is pervasive.

Three county commissioners appeared at a news conference Wednesday to try to tamp down any suggestion that Obama was not welcome.

“Regardless of our differences with the president on policy issues, we await the president’s arrival and look forward to his show of support for a community who is grieving and whose heartache is immeasurable, especially the families of those killed,” said Susan Morgan, chairwoman of the Douglas County Commission, reading from a statement.

Investigators have not yet shared any motive for the killings.

They have seized 14 guns — six found at the college and eight at the apartment Harper-Mercer shared with his mother on the outskirts of Roseburg.

Authorities have said the gunman’s mother told them her son was struggling with mental health issues, but no details have been released.

Harper-Mercer and his mother shared a love of firearms and would go to shooting ranges together.

Read Next
Singer Julio Iglesias calls Donald Trump ‘a clown’
EDITORS' PICK
WHO says monkeypox is not yet a health emergency
Beyond the Chocolate Hills: A farm-to-table, heritage culinary adventure of Bohol
Guarding Sara: Why next VP is getting own security team
House energy committee chair Arroyo bats for cheap electricity
Metro Manila logged most number of new COVID-19 cases — OCTA Research
A massive highway complex makes living in the South highly attractive
MOST READ
2 foreigners die in Batangas
Bea Alonzo, under lie detector test, says she wants prenup agreement with future husband
Guarding Sara: Why next VP is getting own security team
Marjorie Barretto to speak up on Dennis Padilla, kids’ relationship ‘in time’
Don't miss out on the latest news and information.