They were seen waving frantically by their loved ones from the second floor pleading to be rescued. But they were trapped on the second floor by windows with iron grills and wire netting that not even cats could escape through, said a father searching for his missing daughter.

A mother, seeing rows of burned bodies while looking for her missing son, refused to believe he was dead, insisting he might be among those brought to a hospital.

Fire authorities said investigators would look into why the factory workers were unable to escape from the second floor when there was supposedly a “sufficient exit” that included a wide stairway to the back of the building leading to the outside.

They will also look into whether there were more people inside the building than allowed.

Who is to blame for the fire that turned a slipper factory in Valenzuela City into a seven-hour inferno that killed at least 72 people?

Death toll could go up

But Senior Supt. Emmanuel Aranas, Philippine National Police crime lab deputy chief for operations, said the death toll could still go up because there were still bodies on the second floor.

“The remaining cadavers were covered by the ceiling that fell down,” Aranas said.

“We cannot tell if the victims were already there when the fire started or they went up and why there were window bars,” Roxas said.

Dionesio Candido, whose daughter, granddaughter, sister-in-law and niece were among the missing, said iron grills reinforced with fencing wire covered windows on the second floor that “could prevent even cats from escaping.”

He said he was allowed by authorities to enter the gutted building, where he saw charred remains “piled on top of each other.”

While investigators were still looking for answers, authorities on Thursday ordered the dismissal of two fire officials.

Police said the fire started when sparks from a welding machine set ablaze flammable chemicals near the main entrance of the factory, triggering a huge explosion, followed by billows of black smoke and flames.

Charges to be filed

“Definitely there will be charges here because people died,” said Leonardo Espina, acting director general of the Philippine National Police.

“Regardless of whether it was an accident or arson, people died. We are just determining what exactly happened so that we can clearly define what charges to file,” he added.

Charges will be filed against “all those accountable and those at fault,” Espina said.

While officials were looking into the possible liability of the company and the welders, some families could not help but wonder why the fire fighters failed to rescue their loved ones working at the factory of the Kentex Manufacturing Inc.

Of the casualties, 69 bodies were found in the assembly section on the second floor of the factory on Tatalon Street in Barangay (village) Ugong, Interior Secretary Mar Roxas told families.

Two of the three adjoining buildings in the 3,000 square-meter factory compound were gutted by the fire. Only the storage area was not burned.

Of the casualties, 36 were female, 28 were male. Several remained unidentified. One of the women was pregnant. Retrieval operations ended at 2:05 p.m.

Iron grill bars on windows are common in offices, factories and homes in the Philippines to keep away thieves. In workplaces or factories, they are also meant to prevent employees from stealing equipment or products.

Valenzuela Mayor Rex Gatchalian said that a workers’ log book was lost in the fire and the foreman was among the dead, making it difficult to

determine how many were inside the factory at the time.

Jessica Reyes, sister-in-law of one of those missing, said the fire fighters could have done something to save lives.

“We saw them (those trapped) waving their hands by the window. They were struggling for hours. They could have done something,” Reyes said.

The relieved fire marshal, Lagan, said the authorities were investigating if the second-floor door near the staircase was locked. But that could not be confirmed yet because the door was damaged, he added.

“Number of persons is supposed to be a requirement because if it exceeds, regardless if the employees are regular or contractual, it’s a violation,” Lagan said.

“Most probably there’s violation because a room with 50 people should have a sprinkler. The gap per head between the sprinklers should be three meters,” he said.

Mayor Gatchalian said one of the burned-down buildings was issued a building permit as far back as 1996.

“Whoever was the building official then was correct in his judgment on the building’s structural integrity, as shown by its four corner beams which remains erect even after the fire,” Gatchalian said.

District Fire Marshal Wilberto Rico Neil Kwan Tiu said that the building had other exits but apparently the workers were overwhelmed by the thick black smoke from burning rubber and chemicals, which are highly flammable and caused the blaze to spread quickly. 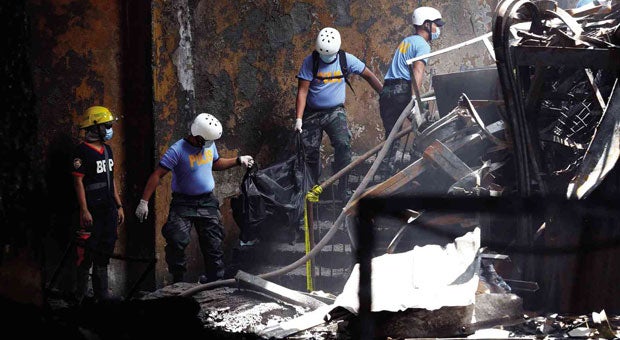 THE MORNING AFTER Police officers use body bags to bring up the remains of workers trapped in the seven-hour fire on Wednesday that gutted Kentex Manufacturing Inc. in Barangay Ugong, Valenzuela City. Burned beyond recognition, the trapped workers were among the 72 confirmed dead in the fire. LYN RILLON

“The factory fire is a blow to the Aquino administration, which has prided itself on improving workplace conditions and prioritizing compliance with labor standards,” Taylor said.

Factory owner Veato Ang said about 200 to 300 people worked in the factory, which made flip-flops and slippers for Kentex Manufacturing.

Firefighters and police have pulled dozens of corpses out of the ruins of the two-story building.

“Many of those retrieved were reduced to skulls and bones,” Espina said during an emotional press conference.

The building, among a long row of factories in Valenzuela, made cheap slippers and sandals for the local market.

The footwear had names such as “Havana” that sound like well-known global brands, company employees said.

The factory workers toiled for below minimum wage while surrounded by foul-smelling chemicals and were not aware of fire safety standards, survivors and relatives said.

“The families can’t help but be angry about what happened. We will never forget this,” Rodrigo Nabor, whose two sisters were inside the factory and remain unaccounted for, told AFP.

“I’ve lost hope that they survived,” said Nabor, 31, who works at a nearby plywood factory.

“They said they keep an electric fan on to drive some of the smell away,” he said.

Nabor said the pay depended on how many sandals workers finished, which could be as little as P300 a day. Nabor’s sisters each had a young child.

One survivor, 23-year-old Lisandro Mendoza, said he escaped by running out the back door, but that the company had not conducted any fire safety education or drills during his five months working there.

“We were running not knowing exactly where to go,” Mendoza said.

“I was having lunch when I saw smoke coming from the front, then I just ran and kept running,” he added.

“I had never been involved in a fire drill ever,” said Victoriano, who had worked at the factory for five years.

Victoriano said she was able to escape because she was near the front door when the blaze started.

The fire marshall of Valenzuela and another official have been removed from their posts following the blaze.

The BFP spokesman, Supt. Renato Marcial, said the administrative relief of Lagan and Oculam was a “normal procedure.”

“It’s a normal procedure especially when there is an investigation which will also delve into whether or not there are some lapses committed,” Marcial said.

Gatchalian said the dead would individually be placed in coffins with assigned numbers so it would be easy for families to claim them.

The recovered items, such as jewelry and wallets, would be displayed for public viewing.

Gatchalian also said the city government would shoulder the expenses for cremation and transporting the remains to provinces, if necessary.

Valenzuela Rep. Magtanggol “Magi” T. Gunigundo called for a probe into the fire.

Deadly fires regularly rip through the poor areas of the Philippine capital, but mostly in shanty homes where there are virtually no fire safety standards.

In the deadliest fire in Manila in recent times, 162 people were killed in a huge blaze that gutted a Quezon City disco in 1996.–With reports from Gil C. Cabacungan and wires