THE death toll from the fire that hit a footwear factory in Valenzuela City on Wednesday morning has risen to 72.

A Radyo Inquirer report said the number of charred bodies being recovered from the burnt factory of Kentex Manufacturing, Inc. already reached 72 as of Thursday afternoon.

State of Calamity will be declared in Valenzuela, the report said.

As of posting, retrieval operations being conducted by the local government is still ongoing.

As forensic officers worked to identify the dead and reconcile their names with those listed as missing, questions were being raised if the factory followed fire and building safety standards.

Dionesio Candido, whose daughter, granddaughter, sister-in-law and niece were among the missing, said iron grills reinforced with fencing wire covered windows on the second floor that “could prevent even cats from escaping.”

He said he was allowed by authorities to enter the gutted building, where he saw charred remains “piled on top of each other.”

Police will file charges against “all those accountable and those at fault,” said police Deputy Director General Leonardo Espina.

Valenzuela city fire marshal Mel Jose Lagan said arson investigators will look into why the people were unable to escape from the second floor when there was a “sufficient exit” that includes a wide stairway to the back of the building leading to the outside. They will also look into whether there were more people inside the building than allowed.

Iron grill bars on windows are common in offices, factories and homes in the Philippines to keep away thieves. In workplaces or factories, they are also meant to prevent employees from stealing equipment or products. 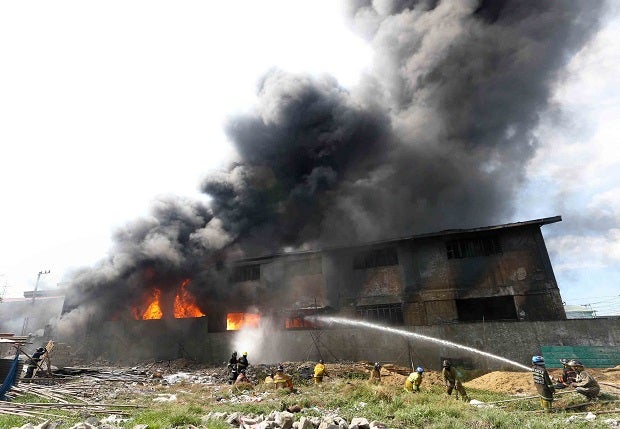 Valenzuela Mayor Rex Gatchalian said that a workers log book was lost in the fire and the foreman was among the dead, making it difficult to determine how many were inside the factory at the time.

The chief of the national police medical examiner’s office, Emmanuel Aranas, said fingerprints could no longer be used to identify the burnt victims and forensic officers will have to rely on dental records, DNA and personal items to identify the bodies.

Gatchalian said the fire was apparently ignited by sparks from welding work at the factory’s main entrance door, triggering an explosion of the chemicals used to make the slippers. Workers fled to the second floor where they were trapped, he said.

District Fire Marshal Wilberto Rico Neil Kwan Tiu said that the building had other exits but apparently the workers were overwhelmed by the thick black smoke from the burning rubber and chemicals, which are highly flammable and caused the blaze to spread quickly. With report from Erwin Aguilon, Radyo Inquirer 990 AM / DPL/AC