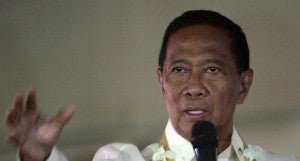 Vice President Jejomar Binay on Thursday slammed the Anti-Money Laundering Council (AMLC) for making it appear that he had hidden wealth and said its report was part of an attempt to derail his bid for the presidency next year.

In a statement, Binay said only five bank accounts in the freeze order were under his name and that the money there were “acquired legally.”

“They are not hidden wealth. AMLC is really wrong,” said Binay, who was in San Jose, Occidental Mindoro province, to visit a housing program there.

Binay denied AMLC’s claim that his only source of funds came from his government salary and this did not match the amounts in his bank accounts.

“My accounts include income and savings before I joined the government. We also have businesses that are already decades old,” he said, adding that they paid taxes.

He said the AMLC was wrong again when it considered legal campaign contributions that had been reported to the Commission on Elections and included in his bank accounts as ill-gotten.

“AMLC even included the bank accounts that have already been closed. AMLC is definitely wrong,” the Vice President said.

To all of these, Binay said that it was not only in the Senate but also in the AMLC that one could find “fiction writers and manghuhula (fortune tellers).”

On Monday, the Court of Appeals (CA) granted an ex parte petition by the AMLC to freeze for six months 242 bank accounts and other assets of Binay, his wife Elenita, his son Makati Mayor Jejomar Erwin “Junjun” Binay Jr., and his alleged dummies. The court said there was “probable cause to believe” that the assets were related to “unlawful activities.”

Binay also said his detractors, by leaking the AMLC report, were willing to violate the law in order to destroy him.

Echoing his lawyers, he said that the law bars the release of the AMLC report because it was “one-sided” and did not include his response to the findings.

“The release of the AMLC report is truly a part of the conspiracy to destroy me because of the 2016 elections,” Binay said.

Binay’s popularity rating has dropped sharply since the Senate blue ribbon subcommittee began hearings on allegations the Makati City Hall Building II constructed while he was mayor was overpriced. He has denied wrongdoing.

The Binay camp has threatened “to prosecute to the fullest extent of the law” any party that published the AMLC report and the court’s freeze order.

Legal experts on Thursday said the AMLC, not the media, could be held liable for violations of the bank confidentiality and nondisclosure rules.

“The provision on confidentiality applies to AMLC persons so they will not leak the information to account holders before freezing,” University of the Philippines College of Law dean Pacifico Agabin told reporters.

He said keeping AMLC reports confidential was important to avoid any leakage.

Fr. Ranhilio Aquino, dean of the San Beda College Graduate School of Law, agreed: “There is confidentiality in respect to the report of the covered institutions. On the part of the AMLC, the confidentiality is in relation to judicial and prosecutorial processes.”

“If the Binay camp files a case and it is allowed to prosper, this will go to the Supreme Court and will be a leading case on freedom of the press. My view: Public interest prevails here and freedom of the press against prior restraint will prevail,” Antonio La Vina, dean of the Ateneo School of Governance, said on his Facebook account.

Case for prior restraint

The Anti-Money Laundering Act, Aquino said on his Facebook account, provided secrecy on the issuance of freeze order by the court on AMLC petition.

“The freeze order is meant to prevent the suspected person from dissipating the assets—selling, transferring, alienating or concealing them. This is the reason for the confidentiality requirements in the law. Banks, stock brokers and investment houses are characterized by the law as ‘covered institutions’—which means that it is these that are obligated to report to the AMLC,” he said.

“If the covered institutions precipitously disclose the report, the persons who are really engaged in the crime of money laundering will be forewarned, and the purpose of the law frustrated, which is why the law forbids any disclosure of the report, and any communication to and by the media,” he added.

Aquino, however, admitted that under the amended Anti-Money Laundering Act, there was no requirement that the issuance of a freeze order by the CA was covered by secrecy or confidentiality.