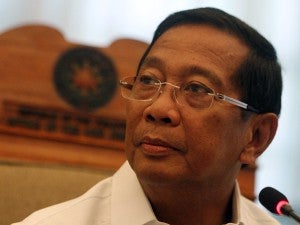 MANILA, Philippines–Vice President Jejomar Binay sees “dirty politics” behind the move of the Office of the Ombudsman to open an investigation of allegations that he and his son, Makati Mayor Junjun Binay, were involved in the overpriced construction of the Makati City Hall Building II.

But Binay said he and his son were ready to face the music.

“We said from the very start that we are ready to face it and explain what really happened in the proper forum. So, now here is the Ombudsman,” Binay said in a media interview on Saturday after he attended a conference of Seventh-Day Adventists at Cuneta Astrodome in Pasay City.

Last week, the Ombudsman formed a special panel of investigators to look into the complaint of graft and malversation against Binay, his son and 22 Makati government officials and private contractors for alleged irregularities in the public bidding and awards process of the Makati City Hall Building II, which is largely a car park.

The Ombudsman’s move against the Binays came after it conducted its own investigation.

Since last year, a subcommittee of the Senate blue ribbon committee is investigating the car park project and has yet to conclude its probe.

The probe has expanded to other alleged corrupt and questionable deals involving the Vice President when he was Makati mayor.

These included the security and janitorial services at City Hall, the construction of Makati Science High School Building, his ownership of various condo units, his agricultural estate in Batangas and the deal between the Boy Scouts of the Philippines (BSP) and Alphaland Corp. to develop the BSP’s one-hectare property in Makati. Binay is a longtime president of the BSP.

The Binays have denied wrongdoing attributed to them by their detractors.

On Saturday, Binay took issue with the press release the Ombudsman issued the day before, saying the office made it appear that he and his son had been charged with graft. He pointed out that the Ombudsman merely created a fact-finding body to investigate the allegations.

The Vice President said the press release was part of the vilification campaign against the Binays.

In a statement, the United Nationalist Alliance (UNA) on Sunday slammed the Aquino administration for its “selective justice” in rushing corruption charges against Binay and his son while sitting on the cases of Liberal Party members and allies.

UNA interim president Toby Tiangco said the Ombudsman’s preliminary probe of the Binays for the allegedly overpriced Makati parking building was a “high-level design to neutralize the political opposition before the 2016 elections.”

Tiangco griped about the “special” treatment the Vice President was getting from the Senate blue ribbon subcommittee, a Commission on Audit team and the Ombudsman investigating panel.

“The word ‘special’ does not mean it is searching for the truth but it means a special mission to convict at all cost,” he said.

Asked whether the announcement that the Ombudsman was conducting a preliminary investigation was meant to divert public attention from the Jan. 25 Mamasapano debacle, the Vice President said, “That’s true.”

Various groups have called on President Aquino to step down, saying he must be held to account for the Mamasapano debacle.

Binay noted that while the nation was still grappling with the police operations targeting two terrorists that ended with the death of 44 police commandos, the Senate resumed the inquiry into the corruption allegations against him. “Now, the Ombudsman is doing an investigation,” he said.

Binay reiterated that he was a target of dirty politics because he had announced that he would run for President in 2016.–With a report from Gil C. Cabacungan