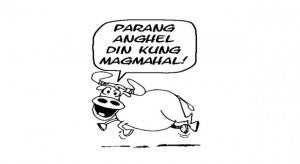 DAGUPAN CITY, Philippines—Mother knows best. That goes even for fish species—at least two of them—which were found to be amazing mothers to their offsprings.

Unlike the conventional fish, the angelfish (Pterophyllum scalare) and the Oreochromis tilapia are caring mothers because they attend to their young until these are old enough to take care of themselves, according to a marine expert here.

Westly Rosario, head of the National Integrated Fisheries Technology Development Center in Barangay Bonuan Binloc here, said that while most fishes lay millions of eggs, they just leave them alone to survive.

“For example, the lapulapu (grouper) and the bangus (milkfish) and almost all marine fishes, lay millions of eggs. But their breeding behaviors are not good, leading to a very low survival rate,” Rosario said.

The angelfish, on the other hand, would attach its clutch of about 300 eggs on one side of an aquarium and would guard the eggs.

After about 30 hours, the eggs hatch. The angel fish then watches over the larvae.

“Because these are moving, some of the larvae are detached from the clutch and fall to the bottom of the aquarium. The mother angelfish would pick them up and attach them again to the aquarium wall,” he said.

Rosario said the mother only leaves the young once they can already swim on their own after six days.

“The angelfish is also monogamous; it only has one partner. Once the partner dies, it also eventually dies. I don’t know if this has something to do with its name. But it looks like an angel,” he said.

If an angelfish takes care of its young for six days, the Oreochromis tilapia watches over its offspring for at least three weeks without eating, Rosario said.

“Its parental care is really the most dramatic among fish species. Upon the fertilization of eggs, the mother puts them into its mouth and incubate them there for at least three weeks until they hatch,” Rosario said.

Female tilapia has bigger head than the male because of the buccal cavity that can accommodate at least 300 eggs, he said.

“When the young tilapia are already able to swim, the mother still watches over them. And if there’s a threat, it takes them into its mouth again,” he said.

Female tilapia are smaller than their male counterparts, “and this is not profitable for farmers because they end up breeding smaller tilapia,” he said.

To solve the problem, a tilapia sex reversal process was developed in the 1980s.

The process, which was developed by Dr. Rafael Guerrero, makes use of male hormones mixed with the fish food.

“We collect the eggs from the tilapia’s mouth and incubate them in an environment that simulates the buccal cavity,” Rosario said. “Eventually, they will hatch. Once the fry can already eat, their first food must be treated with male hormones. After about 28 days, they are all male.”

Unlike the angelfish, tilapia is polygamous. Once the fry has weaned out, the female tilapia is ready to spawn again, choosing its own partner.

Dagupan City: ‘Kitchen of the North’