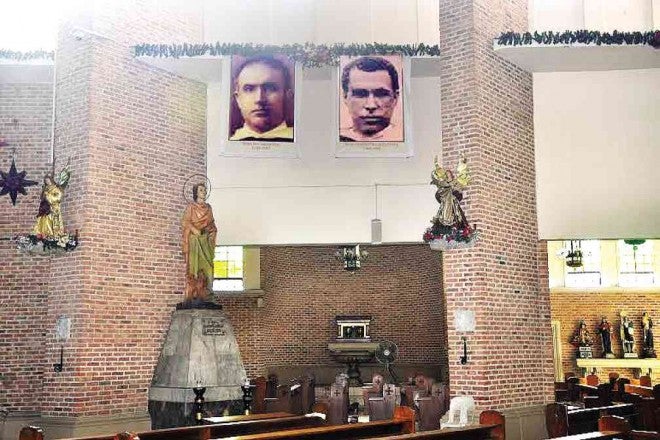 DAGUPAN CITY—The St. John the Evangelist parish here marked its 400th anniversary on Dec. 27, as this bustling coastal city celebrates its city fiesta in honor of its patron saint.

“This year is a historic jubilee year for Dagupan as much as for the whole archdiocese,” said Lingayen-Dagupan Archbishop Socrates Villegas, in a pastoral message for the occasion.

“Through four centuries, St. John the Evangelist has constantly covered Dagupan with his holy guidance and steadfast intercession,” he said.

This city’s parish was established as a visita (a Catholic mission area with no designated priest) by the Augustinian mission in 1590. But in 1614, the Augustinians turned it over to the Dominicans, according to Rosario Mendoza Cortes in her book, “Pangasinan: 1572-1800.”

From its humble beginnings as a visita, St. John the Evangelist parish is now the seat of the Metropolitan See of Lingayen-Dagupan.

“Washed away by floods and shaken by earthquakes, burned by revolutionaries and razed by war, Dagupan stands like a living proof of the fidelity of the Lord [in His promise],” said Villegas.

He said although Dagupan has become the hub of business and industry in Pangasinan province through the years, it is still known today by its Dagupan “bangus” (milkfish) and its main industry is still fishing.

“As a fishing community, we are called like St. John, our patron, to follow him, no longer by abandoning our nets but this time by using our nets to become saints,” Villegas said.

“We can become saints like John the fisherman by keeping our rivers clean and free from pollution as responsible stewards of God’s creation. St. John is not just a patron who prays for us; he is also a model who can help us become saints,” he said.

On November 30, the first Sunday of Advent (the period leading up to Christmas Day), two enlarged black and white old photographs of two Dagupan residents were posted inside the St. John Metropolitan Cathedral here.

“Within the past century, Dagupan has been blessed too with two men of God, former pastors in Dagupan, who are now raised among the beatos (blessed) of the Catholic Church—Blessed Jose Garcia Diaz and Beato Candido Fernandez Garcia,” Villegas said.

The two men, who were martyred in Barcelona, Spain, during the Spanish Civil War, were teachers in the Colegio de San Alberto Magno in Barangay Calmay, which was closed in 1934 after it was destroyed by floods.

“Beato Jose Garcia Diaz and Beato Candido Fernandez Garcia did not use fishing nets to catch fish but they used their golden tongues and sterling lives to win souls for the Lord,” Villegas said.

“The 400th year of Dagupan under the patronage of St. John the Evangelist beckons us to follow the path of the saints because indeed that is who we are,” he said.

Part of the celebration was the launching of the book, “Pananisia (Faith): Heritage and Legacy (The History of the Evangelization of Pangasinan).” Gabriel Cardinoza, Inquirer Northern Luzon