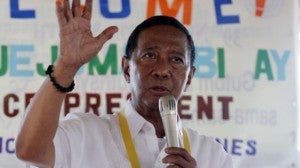 The camp of Vice President Jejomar Binay on Saturday scored the special panel created by the Office of the Ombudsman to investigate alleged anomalies in the construction of Makati City Hall Building II, saying it had not been “forthright” in handling the case.

“The Vice President remains firm that the complaints against him, Mayor Junjun Binay and other Makati city hall officials have no basis in fact and in law,” lawyer Rico Quicho, Binay’s spokesperson for political concerns, said in a statement.

“It is apparent that there is an unscrupulous group that is trying to condition the minds of the public that the Vice President is guilty of a wrongdoing by mere perception without the benefit of a fair and impartial appreciation of the parties’ respective positions,” he said.

The Ombudsman’s special panel had found probable cause to file charges against Binay, his son Makati Mayor Junjun Binay and 22 others in connection with the alleged overprice of the P2.2-billion Makati parking building.

But Quicho said there was no evidence that would show any criminal liability on the part of the Vice President and the other respondents.

He said the Office of the Ombudsman had shown partiality and bias “to the point of disregarding the law and well-settled jurisprudence by issuing a preventive suspension against the Vice President’s son, Mayor Junjun Binay.”