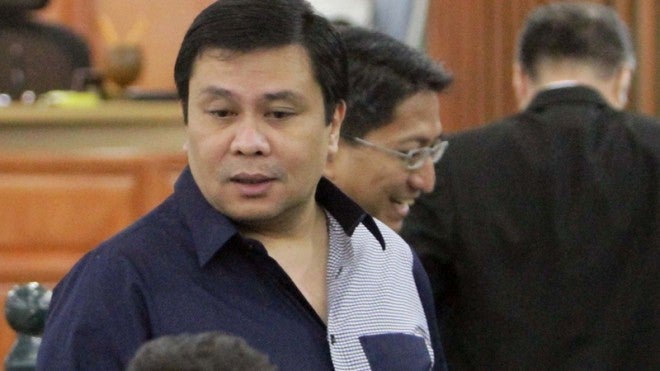 MANILA, Philippines—Detained Sen. Jinggoy Estrada on Monday got another a reprieve from the Sandiganbayan after his lawyers were able to thwart anew the presentation by an Anti-Money Laundering Council (AMLC) official of the AMLC report on the senator’s bank records.

It was the third time in as many weeks that Estrada’s lawyers were able to block the testimony of AMLC bank officer Orlando Negradas Jr. and the presentation to the court of the results of his investigation into Estrada’s bank accounts.

At the resumption of Estrada’s bail hearing, his lawyers asked the antigraft court’s Fifth Division to temporarily prevent the prosecution from conducting Negradas’ direct examination since they would seek a reconsideration of the court’s Feb. 2 ruling which junked Estrada’s motion to suppress the AMLC report.

The 90-page report, a copy of which was obtained by the Inquirer, contained the AMLC’s findings on Estrada’s bank transactions, which the prosecution said would doom the senator’s bid for his temporary freedom.

Batacan argued that allowing Negradas to testify would not prejudice Estrada’s rights as an accused since the AMLC official’s testimony could be stricken off the record if the court granted the senator’s appeal to set aside its earlier ruling.

But Paul Mar Arias, one of Estrada’s lawyers, reminded the prosecution that the Rules of Court allowed an accused to seek a reconsideration of the court’s adverse ruling within a 15-day period.

The defense panel also questioned the court’s supposed haste in junking its motion to block the presentation of the AMLC report as it claimed that the council failed to observe certain “important procedures” in coming up with its report which “violated (the) constitutional rights of Estrada.”

Alexis Abastillas Suarez, another lawyer of Estrada, said the court should have “exercised prudence instead of rushing to decide to accept documents and testimonies taken unlawfully.”

Estrada’s lawyers argued that the court threw out its petition without checking if the AMLC had presented copies of its requests for a bank inquiry and court resolutions which granted such motions.

As this developed, Estrada decried the prosecution’s attempt to prevent him from accessing his bank accounts and properties after it filed a motion for the issuance of a writ of garnishment last week.

“Their request for garnishment has no basis because they have yet to show strong evidence against me,” Estrada told reporters after his bail hearing. “What their witnesses have told the court are all hearsay,” he said.

Meanwhile, the Sandiganbayan threw out yesterday Estrada’s request to attend the Senate inquiry into the bloody police operation in Mamasapano, Maguindanao.

In its ruling, the antigraft court said the Senate could proceed with its inquiry without Estrada.