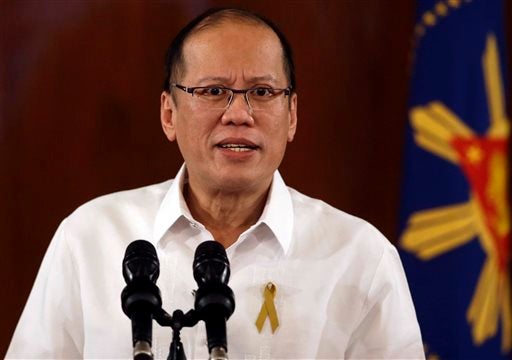 Philippine President Benigno Aquino III addresses the nation in a live broadcast Wednesday, Jan. 28, 2015 from Malacanang Palace in Manila on Sunday’s incident in Maguindanao province where 44 anti-terror police commandos were killed allegedly in a clash with Muslim guerrillas in southern Philippines. AP

Editors’ Note. At 4 pm, on February 1, the original headline was changed. Many readers had expressed their view that the use of the word “butchers” implied that the SAF44 were only pieces of meat. While that implication was not intended, we recognize that another word can be used in the headline without changing the substance of the story.

Finally, a tough stance from the Commander in Chief.

After being roundly criticized for not once coming out to condemn the Muslim rebels who massacred 44 police commandos in Mamasapano, Maguindanao province, last Sunday, President Benigno Aquino III has ordered Justice Secretary Leila de Lima to prepare criminal charges against those responsible for the carnage.

He said the Department of Justice (DOJ) would be building up the cases against the Muslim rebels with the help of the Philippine National Police.

“This will be a joint effort between the DOJ and the PNP. The PNP’s board of inquiry will provide the testimonies of the operatives who were present during the operation and provide other things necessary for the cases to evolve,” Roxas said in an interview during the send-off for some of the slain commandos at Camp Bagong Diwa, the SAF headquarters in Taguig.

Roxas said the President also spoke with the members of the elite SAF at the camp, after meeting with the families of their dead comrades on Friday night.

The number of casualties in last Sunday’s operation was the biggest suffered by the SAF since the elite police unit was organized in May 1983 by then Philippine Constabulary Chief Fidel V. Ramos (later elected to the presidency in 1992).

In his brief address to the SAF troopers, Mr. Aquino recalled his “painful experience,” when he and his group were ambushed in 1987 by rebel soldiers attempting to bring down the government of his late mother, then President Corazon Aquino. Mr. Aquino and another companion survived while three were killed in that ambush, during the bloodiest of the several coup attempts against the first Aquino presidency.

“He told them that they may be feeling the same way because while they survived the encounter, some of their comrades did not. He gave them another perspective of the incident,” Roxas said.

“The President told them that their mission was accomplished because the target, Marwan, was [killed]. While we grieve for our fallen heroes, we were able to provide a safer and more secure environment for the people,” Roxas said.

According to Roxas, Marwan was known to have been the “designer, manufacturer and distributor” of the bombs that had killed innocent civilians in Mindanao for the past several years.

“We are saddened by their deaths. The PNP, the SAF, our country and their families grieve for their loss. But their sacrifices were very meaningful because we were able to lessen the possibility of bomb attacks in our country,” he said.

In a separate interview, De Lima confirmed that the President’s instructions were to do the case buildup and prepare the appropriate criminal charges, in close coordination with the PNP.

From Kuala Lumpur, government peace negotiator Senen Bacani on Saturday challenged those who had planned the police operation to get Marwan to come out and own up and not wait for the various investigations to finish. With reports from Nancy Carvajal and Nikko Dizon