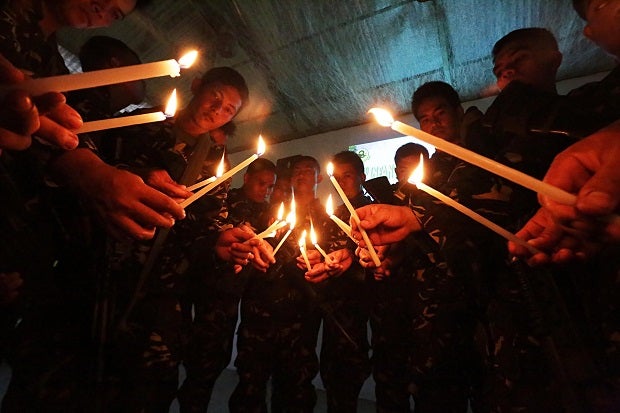 FOR OUR FALLEN COMRADES. Soldiers from the Philippine Army’s 2nd Infantry Battalion in Ligao City, offer prayers and light candles for the death of the 44 members of the Philippine National Police-Special Action Force, who were killed in Mamasapano, Maguindanao last January 25. MARK ALVIC ESPLANA/INQUIRER SOUTHERN LUZON

Thousands of policemen whose job is normally to hunt down criminals or curb street protests on Friday walked carrying roses and candles in their hands. Others shaved their heads in mourning.

Still others struggled along carrying Philippine flags at half-mast.

All were in mourning for the 44 members of the Philippine National Police’s Special Action Force (SAF) massacred in a clash with Moro rebels in Maguindanao province.

Most of the marches began before dawn—about the time the SAF troops were mowed down by the insurgents on Sunday.

In a rare gathering, about 5,000 policemen, firemen and jail guards in their uniforms trooped from the Libingan ng mga Bayani to the National Capital Regional Police Office (NCRPO) headquarters in Taguig City, and called for justice for the members of the elite SAF men killed in Mamasapano, Maguindanao.

Usually, cops are seen dispersing protesters during rallies but the scene was different in Taguig yesterday as the policemen in uniform lined up by fours and walked 10 kilometers wearing black armbands and carrying roses, candles and placards to demand justice for their fallen comrades.

Senior Supt. Gilbert Cruz, the Southern Police District (SPD) deputy district director for operations who led the the early morning demonstration, said their walk for justice was new for them.

“We are used to responding to crime scenes and solving crimes but this time, we are the ones asking for justice for what happened to our fellow policemen,” Cruz said.

Using the word “massacre,” Cruz said their walk was a small way of showing how they shared the grief of the families of the massacred SAF officers.

The walk also included some of the families of the victims and other civilians, even members of a US delegation from the Indiana State Police, who were visiting the country.

Almost in complete attendance were the members of the PNP Kaisang Bisig Class of 2009, who lost three of their batchmates in the massacre: Senior Insp. Gednat Tabdi, Senior Insp. Max Jim Tria and Senior Insp. John Gary Erana.

“Our batchmates came from various places like Caraga, Baguio and the Visayas but we made sure most of us were present here to pay tribute to the three police officers closest to our hearts,” Senior Insp. Eric Ortega said.

Ortega said their three batchmates were the leaders of their class, especially Erana, who inspired them with his leadership.

At Camp Bagong Diwa, the group walked to a sympathy board set up near the multipurpose hall where the remains of the SAF officers lay.

They wrote messages of love on the board, lighted candles and placed flowers below.

“We are hoping that justice will be served for our comrades in the service,” Cruz said.

Elsewhere, 19 senior inspectors leading municipal police offices in the Bicol region shaved their heads to show sympathy with the families of their three batchmates belonging to the 2009 class of the Philippine National Police Academy (PNPA), who died in the carnage.

Losing their three batchmates “was just like losing a beloved family member,” she said.

Senior Insp. Bon Billy Timuat, police chief of Claveria, Masbate, sported a “09” figure at the back of his shaved head to emphasize the batch and the year he graduated. The deaths of his batchmates “were very hard and painful to accept,” he said.

Other batchmates of the fallen policemen cried for justice.

Senior Insp. Rey Anthony Villanueva of the Regional Intelligence Division in Bicol, said what happened in Mamasapano was a “massacre.”

“We will carry the pain for as long as we live,” he said.

“What we want is justice” was the common plea of Senior Insp. Domingo Tapel of the Legazpi police; Senior Insp. Jonnel Averilla, officer in charge of the police office in Pio Duran, Albay; and Senior Insp. Glaiza Marie Padua, chief of police of Sto. Domingo, Albay.

Senior Insp. Johnwen Balueta, police chief of Manito, Albay, said his batchmates died in a legitimate police operation. “They went there to implement the search warrant of an identified terrorist and not to engage in war,” he said.

“For now what I can offer is prayer,” said Senior Insp. Jan King Calipay, of the Polangui Municipal Police Office in Albay.

Flags were raised at half-staff at provincial capitols, town halls and police stations across provinces in Southern Tagalog, Bicol and Mimaropa (Mindoro, Marinduque, Romblon and Palawan).

Policemen across the regions also offered Mass, flowers and lighted candles in front of their police stations to honor their slain colleagues.

They also covered their badges with black ribbons and wore black armbands.

Insp. Breezy Sanchez, spokesperson of the Camarines Sur Provincial Police Office, said they would wear black armbands and black ribbons as part of their uniforms until the last of the 44 policemen had been buried.

In Bicol, 20 senior inspectors working as chiefs of police in various areas and who are members of Class 2009 also had their heads shaved.

The Albay provincial government said its officials would personally deliver P10,000 each to the families of the slain SAF members.

They also observed a three-minute silence.

In Isabela province, the Catholic faithful joined police officers in a “walk for peace” in Santiago City.

The “running priest,” Fr. Robert Reyes, who led the activity, said the walk expressed their grief for the fallen officers, three of whom were from Isabela.

“Together we pray and say, ‘Peace walks, peace talks’ for indeed if we walk together for peace, peace will begin to speak and spread through us,” he said.

Parishioners joined the Santiago policemen in a 2-kilometer march to the Saint Francis of Assisi Church.

At least 700 policemen from different units in Cebu province braved the early morning drizzle to show their sympathy for the families of the slain SAF policemen.

They converged at the Cebu I.T. Park at 4 a.m. and marched to Camp Sergio Osmeña, headquarters of the Police Regional Office.

Among those who joined the “Sympathy Walk for Justice” were policemen from various units.

Police units from Mandaue, Cebu and Lapu-Lapu, as well as the Regional Public Safety Battalion, were also represented.

“This is just a show of sympathy. We still believe in the government that they will not turn their backs on this one. We expect that justice will be served,” he said.

The group gathered at St. Ignatius Chapel for Mass. In his homily, Fr. Celso Magbanua urged the policemen to learn from what happened to the 44 SAF members.

“We should reflect or else their death will be put to waste … This can be a big thing as long as we learn from this experience,” he said.

In Iloilo, at least 150 policemen paid tribute to the slain SAF members in a simple ceremony in Sta. Barbara town.

The policemen who wore black ribbons donated cash totaling about P25,000 for the families of the slain commandos.

In Lucena City, Senior Supt. Ronaldo Genaro Ylagan, Quezon police chief, said police officers in Quezon who were graduates of the PNPA would not join the call for a mass leave.

But Ylagan clarified that if any of the PNPA alumni in Quezon would decide to join the leave, “it is their right and I respect that.” With reports from Romulo O. Ponte, Delfin Mallari Jr., Jofel Joyce Lancion, Michael Jaucian and Shiena Barrameda, Inquirer Southern Luzon; Doris C. Bongcac and Nestor P. Burgos Jr., Inquirer Visayas; Melvin Gascon and Leilanie Adriano, Inquirer Northern Luzon; and Tonette Orejas and Greg Refraccion, Inquirer Central Luzon