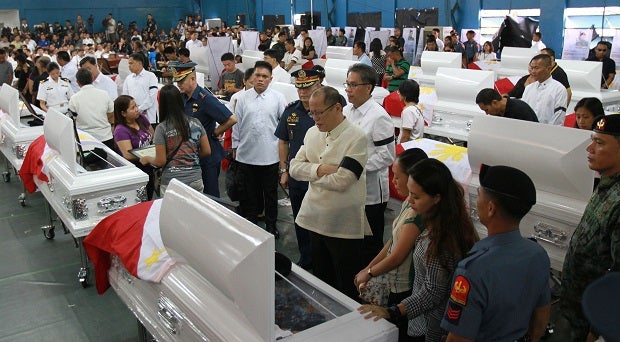 The Inquirer learned from a well-placed source that Mr. Aquino sent the message to Mohagher Iqbal through Presidential Adviser on the Peace Process Teresita Deles shortly after 44 elite police commandos were killed in a clash with Moro guerrillas in Mamasapano town, Maguindanao province, on Sunday.

Get out of the way

The President’s message to Iqbal was apparently intended to avoid a repeat of the Mamasapano debacle, which would have been considered a success because the SAF commandos were able to take down Marwan, a member of the Central Command of the Indonesia-based terrorist group Jemaah Islamiyah and who was behind a number of deadly bombings in the country and other parts of the world.

Marwan, a bomb expert, was on the list of most-wanted terrorists of the US government and had a $6-million price on his head.

Iqbal and an Inquirer source separately said that it was the SAF commandos who fired the first shot, triggering a gun battle where the policemen were outnumbered and found themselves contained in an open cornfield.

The deaths of the 44 SAF commandos triggered nationwide anger, with some sectors calling for the junking of the peace agreement.

The outrage was stoked by President Aquino’s admission that he had been consulting with Director General Alan Purisima, a close friend, on the “intricacies” of the operation against Marwan and Usman even though the Philippine National Police chief remained suspended over graft charges.

Napeñas said it was Purisima who called the shots in the Mamasapano operation.