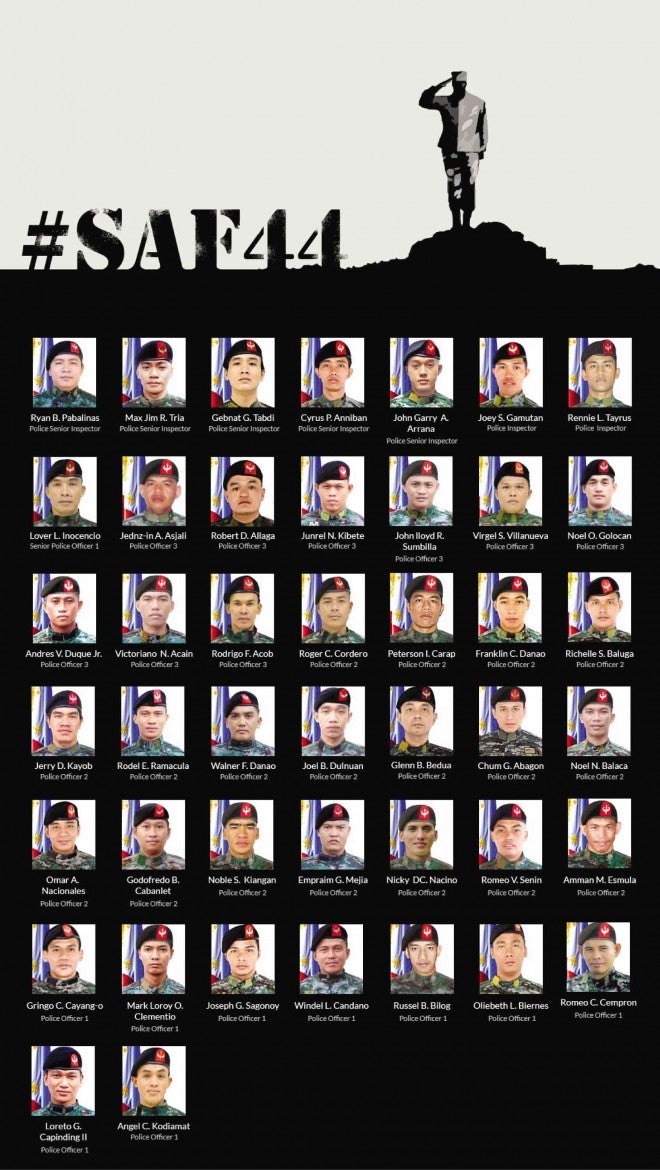 “IS IT WORTH IT? One international terrorist, equivalent to 44 SAF troopers I am sure if you will ask them, it is worth it. Because many more lives would be saved and protected with the killing of Marwan.” PHOTO FROM PNP

The 44 Special Action Force (SAF) commandos killed in the Maguindanao clash with Moro rebels last Sunday will receive the Bravery Medal or the Medalya ng Katapangan, one of the highest recognition given by the Philippine National Police.

The medal, the PNP’s equivalent of the military’s Gold Cross, will be given to the slain SAF troopers as well as the wounded, said PNP spokesperson Chief Supt. Generoso Cerbo.

“This is usually given to policemen engaged in combat operations. But unlike the valor medal, this is purely an award; the benefits will be separate,” Cerbo said on Friday.

The fallen heroes will also get a posthumous promotion, with “all financial benefits and pension due their surviving kin computed based on the salary scale of the new rank,” PNP officer in charge Deputy Director General Leonardo Espina said.

The dependents of the slain policemen will receive scholarships as well, from funds culled from the revenue of gun permits and licenses, and death benefits that range from P1.5 million to P2 million, based on the following: P250,000 from the President’s Social Fund; P141,000 to P181,000 as Special Financial Assistance; P50,000 burial benefits, and P200,000 gratuity from the National Police Commission (Napolcom).

Depending on their rank, policemen who were members of the Public Safety Mutual Benefit Fund stand to receive death insurance claims from P225,000 to P417,000.

Their kin will get a monthly lifetime pension from the PNP as well, which ranges from P15,000 to P25,000 depending on their rank, and roughly the same amount for five years from the Napolcom.

The PNP has also opened a bank account at the Land Bank of the Philippines for the slain SAF troopers. Donations may be made through PNP Special Assistance Fund Account No. 1862-1027-77. Donors may contact Chief Insp. Renante Pinuela of the Directorate for Comptrollership through 0917-8576020.

The remains of the 41 policemen are scheduled to be brought to their respective hometowns following the necrological service at Camp Bagong Diwa in Taguig on Friday.

Of the 44 slain SAF troopers, 13 were from the Cordillera region, seven from the Zamboanga region, six from Cagayan Valley, five from the Eastern Visayas, three from Northern Mindanao, two from Central Visayas, and two from the Ilocos region.

The remains of two of the fatalities from Cagayan, PO2 Richelle Baluga and PO1 Olibeth Viernes, are expected to be flown to Tuguegarao City this Saturday morning, said Alex de los Santos, spokesperson of the Cagayan Valley police regional office.

In Ilocos Norte, Gov. Imee Marcos and the Ilocos Norte police offered a memorial Mass for PO2 Omar Nacionales of Marcos town, one of the SAF policemen killed in the clash.

A huge poster of Nacionales in his uniform was strung up in front of the capitol, which has kept the Philippine flag at half-staff since Wednesday.