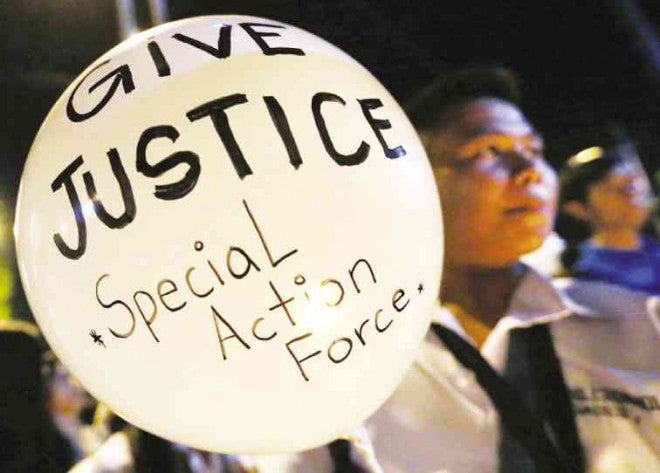 ANGER ABOUT TO BURST
A balloon held by a student makes the nation’s clamor plain and simple during a vigil held outside Camp Bagong Diwa in Taguig City in honor of the police commandos slain by Moro rebels in Maguindanao province. RAFFY LERMA

The Manila City government is setting aside P5 million from its 2015 budget to help the families of the police commandos killed or wounded by Moro rebels in a recent operation in Mamasapano, Maguindanao province.

The city council on Friday passed a resolution approving the release of the amount from the funds of the Office of the Mayor as financial assistance to the families of the Special Action Force (SAF) members.

“We grieve the loss of 44 brave, noble men,” Estrada said in a statement. “We extend our deepest sympathies to their grieving families for their loss is immeasurable. And we will keep the memory of the SAF 44, our fallen heroes, ever alive in our hearts. Our nation owes you all a debt of gratitude.”

The mayor and former president was one of the government VIPs who went on Friday to Camp Bagong Diwa in Taguig City, where necrological services were held for the slain SAF men.

In the resolution, the council said it fully supported Estrada in extending the financial assistance. “The mayor, being the former president of the Republic of the Philippines and its commander in chief, firmly believes that every Filipino should honor the policemen for their heroism and sacrifice in the battlefield while performing their sworn duties, and express sympathy to their families,” they said.

On Jan. 25, close to 400 members of the elite police unit were sent to arrest two high-level terrorists—Malaysian bomb maker Zulkifli bin Hir alias “Marwan,” and Filipino Basit Usman—in an operation that turned into a “misencounter” with Moro rebels.

Two days after the SAF debacle, the former president spoke at length about the approach he took. “For me, to achieve real peace in Mindanao and to avoid further bloodshed and incidents like this, we must end this immediately so that no more lives will be sacrificed.”

“That’s still what they do now. Will you still trust them?” Estrada said.