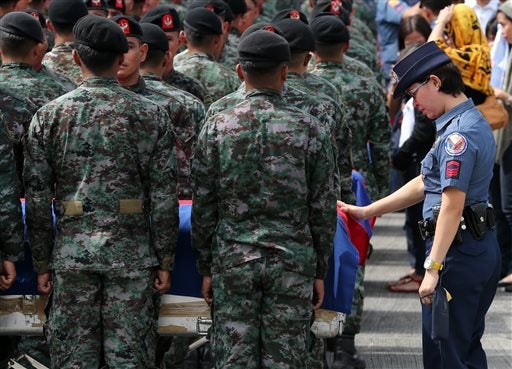 Members of the Philippine National Police Special Action Force mourn the police commandos who were killed in what authorities said was an accidental clash with a Muslim rebel group, Thursday, Jan. 29, 2015 at Villamor Air Base in Pasay, Philippines. AP

Police Director Getulio Napeñas was sure of one thing: His men were still alive around noon last Sunday.

That was about six hours after the second group of Special Action Force (SAF) commandos got into a gun battle with Moro rebels.

The first group, for which the second force was providing cover, had shot its way out of Tukanalipao village in Mamasapano town, Maguindanao province, where it killed Malaysian terrorist Zulkifli bin Hir, alias “Marwan.”

“They were alive, sir, they were alive. Many of them were wounded and they had run out of ammunition,” Napeñas, the sacked SAF commander, quoted PO2 Christopher Lalan as telling him after the clash.

Napeñas told this reporter in an interview on Thursday that the bodies of many of the 44 commandos who were killed in the Mamasapano operation showed that they had been given first aid.

“Their wounds were bandaged, or properly stitched. They had a fighting chance. They held on,” Napeñas said.

All the 392 SAF commandos deployed to Mamasapano to get Marwan and local terrorist Abdul Basit Usman had undergone tactical combat casualty care, he said.

“They carried individual life savers (ILS). I made sure all of them had ILS,” he added, referring to the emergency kits.

The fire fight went on until the commandos ran out of ammunition. It was almost noon.

Napeñas said the last contact with the troops, who were pinned down in a cornfield, was before 1 p.m. Help never arrived.

The nearest Philippine Army units that could respond were the Mechanized Brigade in Shariff Aguak town, the 45th Infantry Battalion in Mamasapano and the 601st Infantry Brigade in Awang town.

“The most difficult thing was I knew my men were still alive and no reinforcements were coming other than our own forces,” Napeñas said.

“It was difficult because I decided not to coordinate prior to our actual jump-off. I knew the Philippine Army in the area was ready to reinforce us at once. But they were also waiting for orders, and I understand that. I do not blame anyone, that’s why I said I was responsible,” he said.

Fighting in the afternoon

Mamasapano Mayor Benzar Ampatuan confirmed to this reporter that IVs (intravenous), bandage and other medical items were found in one area in Tukanalipao where the bodies of the slain commandos were recovered.

The area was about 4 to 5 kilometers away from the Pidsandawan village, where Marwan was cornered and killed by the SAF assault team.

“We don’t know until what time they lived. We have no way to find out. What we know is that there was still fighting at 3 p.m., when negotiations were going on for the entry of the International Monitoring Team and the local government,” Ampatuan said.

“But the fighting was far from the area where we were to retrieve the bodies. We got there about 5:30 p.m.,” he added.

In an interview on Tuesday, Napeñas said he was taking full responsibility for what happened in Mamasapano.

In that interview, he said his not coordinating the operation with his superiors—Deputy Director General Leonardo Espina, the PNP officer in charge, and Interior Secretary Mar Roxas—delayed the arrival of reinforcements, which cost the lives of his men.

But he just followed orders, he said.

Who gave the go-signal?

This reporter asked him who knew about the Mamasapano operation.

Without hesitation he said: “The President, of course, because we had been working on this mission for a long time. As I told you, it was command commitment. We knew how dangerous Marwan was and that was the basis of this operation, to save the lives of the innocent people from the Bin Laden of Southeast Asia.”

A senior police official who asked not to be named told this reporter that Napeñas also admitted to Roxas that it was President Aquino who authorized “Oplan Wolverine,” the mission to get Marwan, a bomb expert from the Indonesia-based terrorist group Jemaah Islamiyah.

“Eventually this will come out and Napeñas owes it to the families of the fallen 44 to admit that he just followed orders because that’s what we do—we follow orders,” the police official said.

In his televised address to the nation on Wednesday, President Aquino admitted that he knew about the operation, which was designed under the leadership of Director General Alan Purisima, the suspended PNP chief, based on an “actionable intelligence.”

Mr. Aquino, however, did not categorically say that he gave the go-signal for the SAF mission.

The after-operation report submitted to the President by the Presidential Anti-Organized Crime Commission indicated that the intelligence information on the whereabouts of Marwan came from the SAF.

Asked about it, Napeñas said the information came from a “capable” unit.

“We just acted on it. The information was solid and verified. We got Marwan,” Napeñas said.

Police Director Leocadio Santiago, a former SAF commander, described Napeñas as “dedicated, someone who is both a good subordinate and a leader who cares about the welfare of his men.”

“I hope people will see the value of the deaths of the officers and men of the SAF. Those men lost their lives in the line of duty in a dangerous place. Let’s recognize that that place is a battleground and they gave their lives in the performance of their duty,” Santiago said.

‘There was radio silence, a very long silence’

‘Behind every brave SAF trooper is a strong wife’