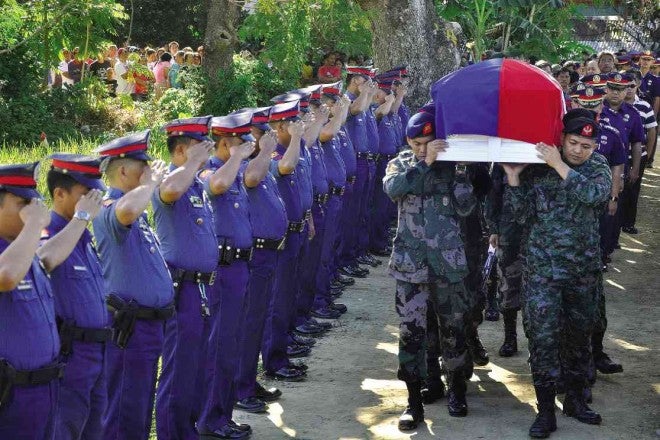 HEARTFELT ARRIVAL HONORS Pangasinan policemen salute their slain colleague, PO2 Empraim Mejia, of the SAF. He’s one of 2 fatalities from Pangasinan. The other is PO2 Romeo Senin from San Fabian. Mejia’s remains were brought to his hometown, San Nicholas. WILLIE LOMIBAO/CONTRIBUTOR

Even in the dead of night, everyone of the fallen was uniformly but heartily saluted and honored.

Shortly after midnight, slow but heavy footsteps and a mournful tune that played over and over again filled the quaint road that leads outside the police camp in Taguig City.

Before dawn on Saturday, the remains of 16 SAF commandos who were killed days earlier in Mamasapano, Maguindanao, were sent off with befitting honors.

The sight of caskets of the slain Special Action Force (SAF) troopers being loaded in a waiting van shushed a crowd of onlookers and policemen who wanted to see the elite police commandos one last time.

A few meters away, vans, trailed by mourners, joined the long, slow procession.

The send-off began shortly after President Benigno Aquino III left Camp Bagong Diwa in Taguig City at past midnight, following more than 12 hours of meeting and talking with the families of the 41 troopers whose remains were brought to the police camp the night before.

Before leaving, the President dropped by the SAF headquarters, avoiding reporters who waited for him outside a chapel where the families were gathered.

He did not attend the arrival honors at Villamor Air Base the day before.

House Speaker Feliciano Belmonte Jr., who visited the wake of the slain policemen, said each bereaved family received a P250,000 check from the Presidential Social Fund, given by the President himself.

“I saw him and listened to him speak with each of the families. He learned of their background, their needs … It’s good that the government really takes to heart each family’s welfare, and even those wounded,” Belmonte said after paying his respects to the families.

At past 1 a.m. on Saturday, policemen lined up as the band began playing the Christian hymn “Nearer, My God, to Thee,” the signal to begin departure honors for the flag-draped caskets, which were brought out of the National Capital Region Police Office (NCRPO) multipurpose hall.

Their remains were brought home to their respective provinces—Tria in Catanduanes, Tabdi in Benguet, and Acob and Duque in Isabela.

On Saturday, 10 of the 12 remaining slain policemen housed in the NCRPO were returned to their respective hometowns after an emotionally charged send-off ceremony in Camp Bagong Diwa.

The first batch was given departure honors around 7 a.m.

Each casket carrying a slain trooper was carried by fellow policemen who marched slowly toward the exit of the multipurpose hall where each casket had been housed since Thursday night.

Each policeman’s family and friends trailed behind the casket, carrying a picture of their slain loved one.

Upon reaching the hall’s exit, each casket—draped in the Philippine flag—was boarded into a St. Peter’s funeral vehicle.

The vehicle then traveled slowly for at least 100 meters, while somber music was played by a band composed of men in uniform.

Policemen who had been pre-positioned on the sides of the road right outside the hall saluted each dead trooper.

After the salute, they joined the policemen’s families and friends in a slow march behind the funeral vehicle.

NCRPO Director Carmelo Valmoria said they were scheduled to be given departure honors at past 12 midnight yesterday.

Authorities said most of the remains of the policemen would be transported back to their hometown via a commercial flight, with the expenses fully paid by the government.

Valmoria said the fallen heroes would be buried in a site of the families’ choice.

“Although they can be buried in Libingan ng mga Bayani, that would be far from the families,” Valmoria told reporters.

He said all burial expenses would be shouldered by the Philippine National Police.

The rest of the caskets of the SAF commandos are expected to be brought home by their loved ones over the weekend.

Palace: Pursuit of peace must continue despite Maguindanao carnage