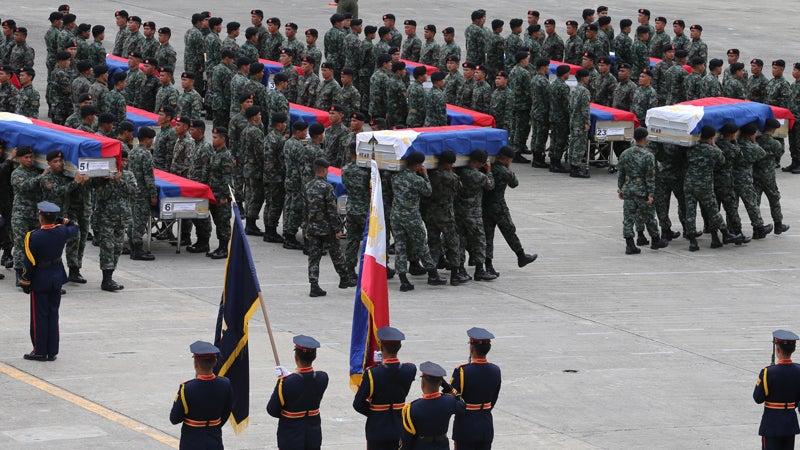 The Philippine National Police Special Action Forces carry the flag-draped coffins of their comrades upon arrival from the southern Philippines Thursday, Jan. 29, 2015 at Villamor Air Base in Pasay, Philippines. The flag-draped coffins bearing the bodies of 42 of the 44 policemen killed last Sunday were flown Thursday to Manila, where top government, police and military officials stood in mourning. (AP Photo/Bullit Marquez)

MANILA, Philippines–Joining the throng of those crying for justice, the Philippine Military Academy Alumni Association Incorporated (PMAAAI) challenged the national government to conduct a thorough investigation on the death of 44 commandos of the Philippine National Police-Special Action Force in Mamasapano, Maguindanao.

“We call on the National Government to conduct an impartial and in-depth investigation to prevent a future recurrence and also to determine moral and leadership responsibilities,” retired Major General Jose Maria Solquillo, chairman and executive officer of PMAAAI, said in a statement issued on Friday.

“The incident impinging on the security of all people in Mindanao must also be seriously and carefully studied in the light of the proposed Bangsamoro Basic Law to prevent greater problems to transpire or emerge thereafter, ” he said.

The 44 SAF commandos were brutally killed in what government officials described as a ‘misencounter’’ with members of the Moro National Liberation Front.

Solquillo added that the PMAAAI “joins the entire nation in grieving at the loss” of the so-called Mamasapano 44.

“The 10,000-member PMAAAI condemns in the strongest possible terms the dastardly act of the perpetrators of the heinous crime against the law-enforcers and their act must not be allowed to pass as a political concession or appeasement.”

“Every member of the slain policemen’s family deserves justice and so does every peace-loving Filipino,” Solquillo said.