Marwan finger cut off for DNA 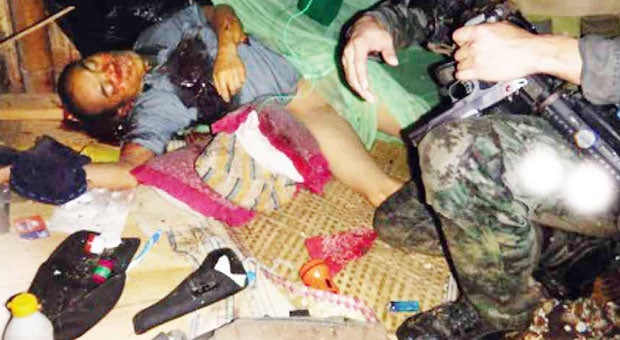 THE END OF THE ROAD Malaysian terrorist Zulkifli bin Hir (also known as “Marwan”) lies dead in his hut, his possessions in disarray after a surprise raid by members of the Philippine National Police-Special Action Force (PNP-SAF) on Sunday morning. Caught unaware in his hideout, the bomb expert with a $6-million reward on his head shot it out with the raiding team and was killed. But the gunfire alerted Marwan’s security and other Moro rebels in the area who ended up killing 44 members of the PNP-SAF in an 11-hour firefight in Mamasapano, Maguindanao. CONTRIBUTED PHOTO

Where is Marwan’s body?

The Malaysian terrorist whose real name was Zulkifli bin Hir was killed in an exchange of gunfire with police commandos in Pidsandawan village in Mamasapano town, Maguindanao province, early on Sunday.

And the Philippine National Police-Special Action Force (SAF) cut off one of the fingers on his right hand to make sure they got the DNA of the most wanted terrorist in Southeast Asia.

Supt. Raymond Train, the highest ranking officer on the SAF raiding team, wanted his men to bring Marwan’s body as the group withdrew after killing the terrorist in a brief exchange of fire.

But the gunfire roused Marwan’s security and soon the commandos came under fire.

Carrying Marwan’s body was now out of the question. The commandos decided to cut off a finger from the terrorist’s hand.

This reporter initially received two versions of the DNA extraction, the first saying the commandos had beheaded Marwan, and the second, cut off his finger.

But Police Director Getulio Napeñas, the SAF commander who was sacked because of the big number of lives lost during the operation, and an official from the Presidential Anti-Organized Crime Commission (PAOCC) confirmed that the commandos cut off one of the fingers of Marwan.

“Finger, a finger from the right hand,” said the PAOCC officer, who is from the PNP.

Train took the finger to Camp Awang in Maguindanao for DNA tests, the report said.

Before withdrawing, a commando took pictures of the dead Marwan, sources said. The body was left in the hut.

President Benigno Aquino III, in a nationally televised address to the nation on Wednesday, reported the death of the bomb expert from the Indonesia-based terrorist group Jemaah Islamiyah.

It has been six days since that deadly “Oplan Wolverine” carried out by the SAF but the government has not produced Marwan’s body.

A classified report submitted to the PAOCC headed by Executive Secretary Paquito Ochoa Jr. said Marwan’s body was immediately buried not in Pidsandawan but in a nearby village controlled by one Ali Tambako of the Justice for Islamic Movement.

According to the report, Marwan’s wife, Joromee Dongon, informed her relatives of her husband’s death hours after hearing about it from the terrorist’s men.

Dongon used to be the wife of Khadaffy Janjalani, leader of the militant group Abu Sayyaf who was killed by government security forces in Sulu province on Sept. 4, 2006.

Was the body buried in Tambako’s village really Marwan’s?

The results of DNA tests will provide the answer.

READ: SAF Chief: I am responsible

Train’s 37-member team shot its way out of Pidsandawan, losing eight men. A second, bigger SAF team that served as a blocking force was attacked by guerrillas from the Bangsamoro Islamic Freedom Fighters (BIFF), the sources said.

Train’s team walked for hours early on Sunday to get to Marwan’s hideout. But it took them less than 15 minutes to kill him, sources said.

Napeñas confirmed the information in an earlier interview, saying the assault force was able to enter Marwan’s hut, but the terrorist was awakened and shot it out with the commandos, getting killed in the exchange of fire.

Napeñas said Marwan was alone in the hut, but the report submitted to the PAOCC said the terrorist had two companions and they were wounded in the gunfight. They were identified as Ben Said, a Tausug, and one Saad, believed to be a Malaysian.

The report said the Jan. 25 operation was the culmination of the intelligence buildup on Marwan that started in October of 2013. The operation was described as a “Complete Intelligence Package.”

Train, who led the assault team, served as the intelligence officer of the operation. He is a member of the Philippine National Police Academy Class 2005.

“The participation of a superintendent or colonel in the actual assault proves that what we did was a command commitment,” Napeñas said.

“Think of it, a colonel as part of the assault team? But that was our stand. We were sure of our intelligence information, that’s why we acted on it at once,” he said.

Napeñas described the Mamasapano operation as similar to “Oplan Neptune Spear,” the covert US Navy Seals operation that got al-Qaida leader Osama bin Laden in Abbottabad, Pakistan, in March 2011.

The Abbottabad operation was CIA-led and while there was no official statement from Napeñas or from any other officer or office involved in the operation to get Marwan, the mission was based on the declaration of the CIA and the US Treasury Department, Office of Foreign Asset Control, declaring Marwan one of the most wanted terrorists in Southeast Asia with $5 million offered for his capture. The reward was later raised to $6 million.

Reward is for informers

Napeñas said the operation was the SAF’s inherent duty as law enforcer and was the execution of a continuing operation, not motivated by the reward.

“No government troops, police or military, will get that reward. That reward is for civilians who would provide intelligence information that would lead to the capture or killing of [Marwan]. What we did is part of our inherent job as law enforcers. We don’t stand to benefit from that reward,” he said.

The mission was successful, as would be shown by the results of the DNA tests, he said.

But Napeñas lost 44 of his men. In an interview with the Inquirer late on Tuesday, he said he was taking full responsibility for what happened. With a report from Inquirer Mindanao