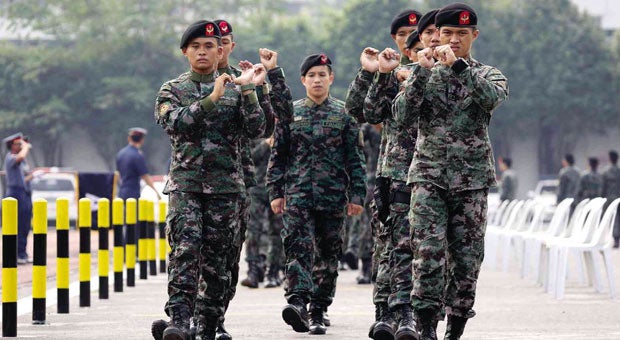 REHEARSING FOR LAST RITES Members of the PNP-SAF prepare for the grim task of carrying the caskets of slain police commandos during arrival honors at Villamor Airbase today. At least 44 PNP commandos died during an encounter with Moro rebels on Jan. 25 in Mamasapano, Maguindanao. LYN RILLON

Police Director Getulio Napeñas admitted on Tuesday that he did not coordinate with the military before launching “Oplan Wolverine,” the disastrous Philippine National Police-Special Action Force (SAF) operation to get Zulkifli bin Hir, alias “Marwan,” a Malaysian terrorist for whose capture dead or alive the United States has offered a $6-million reward.

Marwan is considered the Osama bin Laden of Southeast Asia.

“It was a command decision and we had been working on it for a long time and as a commander, I decided that it was best not to inform other units in the police and the Armed Forces of the Philippines about the plan of initiating the actual assault. It was a judgment call and I take full responsibility,” Napeñas, the SAF commander, told this reporter in an interview on Tuesday evening.

He compared the secrecy about Oplan Wolverine to “Operation Neptune Spear,” the covert US Navy Seals operation that cornered al-Qaida chief Osama bin Laden in Abbottabad, Pakistan, in March 2011.

“Why, was the Pakistani government informed about the operation that got Bin Laden? No, right? This is the same. We received information that required action and it was our duty to take action. It’s inherent to our job as law enforcers and as one command,” Napeñas said.

He said, however, that he made a call to one of his superiors, Deputy Director General Leonardo Espina, the PNP officer in charge.

Napeñas explained that under police operational procedures, a commander should inform his superior about a mission before or during the operation.

He said he initially informed Espina about the Mamasapano operation through a text message at 5:30 a.m. on Sunday.

“I informed him that the operation against Marwan was under way. We were already there and the troops were already deployed,” he said.

He said he could not go directly and report to Interior Secretary Mar Roxas, who has supervision over the PNP, because Espina came first in the chain of command.

Napeñas said the secrecy about the operation was deliberate and recommended by intelligence operatives on the ground.

But the intelligence information received by the SAF placed Marwan right there, he said.

A police source told this reporter that the plan to get Marwan had been running since 2010. Prepared by the Office of the Director for Intelligence (DI), it became official in 2011 and was named Oplan Wolverine.

In the same year, the plan was endorsed by the Office of the Chief PNP, Director General Alan Purisima, and the US-trained SAF was tapped to carry out the operation.

Also in 2011, the source said, Purisima endorsed the plan to the Office of the Presidential Anti-Crime Commission under Executive Secretary Paquito Ochoa Jr. for “additional support.”

The plan was not revised despite the suspension of Purisima last year following accusations of corruption, the source said.

At the start, the source said, all operations related to the plan were jointly undertaken by the PNP and the military. But, as already admitted by Napeñas, the SAF carried out the Mamasapano operation alone.

Napeñas mobilized 392 SAF policemen for the covert operation in Tukanalipao village, Mamasapano town, Maguindanao province, on Sunday to serve a warrant of arrest on Marwan, a bomb expert trained by the Indonesia-based terrorist group Jemaah Islamiyah.

Abdul Basit Usman, a local bomb expert with a $3-million price on his head, was the secondary target of the operation, Napeñas said.

Napeñas was sacked on Tuesday pending investigation of the debacle.

What happened on the ground?

The 392 police commandos were divided into groups were positioned as early as 3 a.m. on Sunday. The plan, according to Napeñas, was for a surgical operation of only 30 minutes. Four nipa huts in the village were the targets of the assault.

At 4:20 a.m., part of the assault force was able to enter the nipa hut where Marwan was sleeping, Napeñas said.

“Marwan woke up, that was around 4:30 a.m., and he managed to be the first to shoot, that’s why some of us were hit. But we returned fire and killed him outright,” he said.

The exchange of gunfire brought Marwan’s security to action. As the policemen were about to pull out, they came under fire from all directions, Napeñas said.

When the firing became intense, one SAF officer extracted DNA from Marwan, Napeñas said. Then the assault team decided it was best to bring Marwan’s body and shoot its way out of there, he said.

The firefight continued and the containment or blocking force was pinned down in an open field, he said.

“They could see each other. It was close-quarters combat. Those who were killed were from our containment force,” Napeñas said.

He said the deaths of 44 of his men pained him.

“I cannot explain how I feel,” he said, his voice cracking. “I love those boys. I cannot take my men’s welfare lightly. They were courageous men, and it pains me more to hear talk that we did this for the reward.”

Not for glory, bounty

Marwan was on the Federal Bureau of Investigation’s list of most wanted terrorists. The bureau initially offered a $5-million reward for his capture, then raised the bounty by another $1 million.

Initially, too, the reward for Usman’s capture was $2 million, but later the FBI raised it to $3 million.

“We did not go into Mamasapano for the money or to be called heroes. We did it for you, for all of you. Not for glory but for the thousands more who could die in Marwan’s bomb attacks. Look into Marwan’s profile and you will see why we decided to neutralize a very dangerous man,” Napeñas said.

But Napeñas was relieved just the same to give way to an investigation, which would be carried out by the PNP Board of Inquiry.

Napeñas said he respected Roxas, Espina and the investigation of the Mamasapano operation.

He said he spoke to this reporter because of two things.

“I trust you and I need to say that those boys died thinking not of the money but of the many more people who could become Marwan’s victims. The death of my men pains me. I love them. I am their chief, but we as a command stand with pride that we took down a very dangerous man,” Napeñas said.