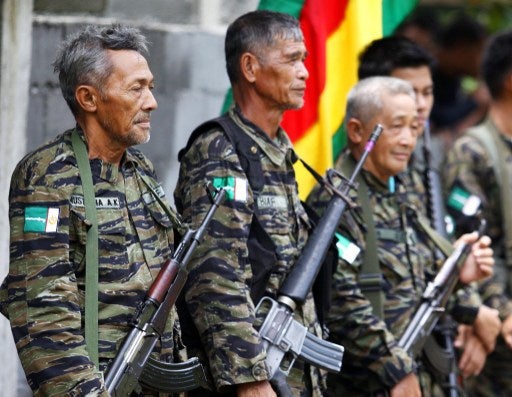 Interior Secretary Manuel Roxas II said Marwan may have been killed in the raid but Usman escaped. Efforts to verify Marwan’s death were underway.

As the commandos withdrew, they came under fire from members of the Bangsamoro Islamic Freedom Fighters.

Some of the policemen maneuvered away in the dark and became entangled in a “misencounter” with heavily armed Muslim rebels belonging to the Moro Islamic Liberation Front, according to Roxas.

When the fierce fighting ended, 44 commandos were dead and 12 others were wounded, national police Deputy Director General Leonardo Espina said. Some Muslim rebels said as many as 56 of the elite policemen died in the daylong clashes, which left about a dozen insurgents dead.

The carnage was the government’s biggest single-day combat loss in recent memory. It shocked many and prompted at least two senators to withdraw their backing for a bill that would create the Bangsamoro entity in the restive Mindanao under a peace deal signed last March. Many more lawmakers and influential Roman Catholic bishops defended the deal.

“Hindi gumagalaw so they should be faulted because…for non-action of the mechanisms they themselves created,” he said.

A peace agreement, according to him, was also created in 1976 and in 1996 and recently the Bangsamoro Bill, but the government failed to implement the previous agreements.

He said that according to reports coming from the ground, though not “conclusive,” the government forces involved in the clash were able to “pin down their target” Marwan.

“That has to be validated,” he said.

Kabalu, who is now the Vice Chairman of the Bangsamoro Transformation Council, said that the parties involved in the crafting of the Bangsamoro Basic Law should not let their emotions prevail amid the Maguindanao bloodbath.

The SAF chief was relieved of his post on Tuesday following the bloody clash in Maguindanao.

The PNP has also created a board of inquiry to investigate the incident.