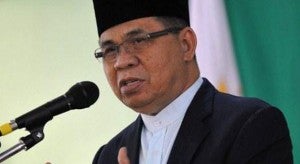 “War is not new to us but I think it is time that we realize that even if we fight now, ultimately we will be returning to a peace process. So, if there is still hope for this peace process, why [don’t we] see it through?” Murad said in Filipino.

He emphasized that the BBL was a “political process.”

“I don’t see any relevance of connecting the political process with the security challenge we are facing because this is entirely different,” Murad said.

“Our concern is the truth. There are a lot of speculations as to what happened and until what happened is established with credibility and integrity, the said incident will weigh down our efforts to bring peace to our homeland,” Murad said.

He reiterated “the MILF’s full commitment to the peace process with the Philippine government,” saying that “(a)n enduring peace and justice remain to be our primary objective.”

Murad said the last time he and the President spoke was on Jan. 13, before the bloody battle.

It was only when the fighting died down that the rebels learned that they had encountered the police commandos.

Goma and Tundok did not take part in the firefight, the Inquirer learned. The two received frantic calls that there was an ongoing firefight and helped the Coordinating Committee for the Cessation of Hostilities to deescalate the fighting.

For over two years, mechanisms such as the Ad Hoc Joint Action Group have been followed, Murad said. “We practically had zero encounter because we were following the protocols. It is only now that this has happened.”

In a statement, Murad expressed sympathies for the slain troops’ kith and kin.

“The emotions of loss and pain are not alien to us Bangsamoro and mujahideen. Nevertheless, respect and solidarity are due to all, irrespective of which side they belong,” he added. With a report from Cynthia D. Balana

Read Next
SAF chief: I am responsible
EDITORS' PICK
Pharmally owes P6.3B in taxes, senators told
Rise to perfection: Spot on tiles for your stair risers
Guanzon for Marcos DQ, sees ‘delay, interference’
COVID-19 cases in NCR, nearby provinces now going down — OCTA
Step up your vlog game with vivo’s newest smartphone
NUSTAR Resort and Casino: Cebu’s next lifestyle and leisure gem
MOST READ
Leni mansplained? Abunda ‘interruptions’ stir own buzz
6 areas to be placed under Alert Level 3 from Jan. 28 to Feb. 15
Rita Avila dismayed by Boy Abunda’s interview with Leni Robredo: ‘Parang ayaw mo pasagutin’
Gordon tells Duterte: I did not steal from Subic funds
Don't miss out on the latest news and information.