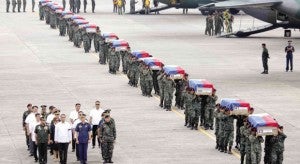 Marching to muted drums, uniformed commandos bore the numbered coffins of their comrades killed in a massacre that left dozens of grieving families, an angry public, policemen weeping and a seemingly defensive President.

On the coffins’ arrival on Thursday at Villamor Air Base after a flight from Cotabato City, a woman stood before a flag-draped casket, immobilized by grief. Another woman hugged another coffin so tightly she refused to let it go.

One woman collapsed to the ground, prompting medical personnel to rush to her aid.

More than 300 pallbearers and three C-130 military cargo planes were needed to bring the dead warriors from Cotabato to Villamor Air Base for a ceremony hailing their readiness to give up their lives for the country.

The killing of 44 Special Action Force (SAF) men in the fighting in Maguindanao province on Sunday represented the worst case of loss of life in the country’s police force—or its military—in recent memory.

Their deaths overshadowed the apparently successful mission of taking down Malaysian terrorist Zulkifli bin Hir, alias “Marwan,” an expert bomb maker behind the deadly bombings in the Philippines and abroad.

The United States had offered a $6-million bounty for Marwan’s capture.

Mr. Aquino was nowhere near Villamor Air Base when the coffins were flown in. He was attending the opening of a Mitsubishi car plant in Laguna province.

Early Thursday at the Cotabato City airport, hundreds of policemen matched their blue uniforms with white gloves to serve as pallbearers.

The fallen commandos were in 42 metal caskets covered in the red, blue and white colors of the Philippine flag.

From being among the best fighters in the country, the commandos had been reduced simply to a number and a name when they were returned to their families yesterday.

Two other SAF troopers were buried earlier in accordance with their Muslim tradition.

The ceremony in Cotabato before the flight to Manila started at 7 a.m. with a prayer and blessing by a priest, followed by the playing of taps.

A commander then ordered 336 policemen to walk toward the coffins, each coffin with eight pallbearers.

“Harap sa mga bayani! (Face the heroes!)” came the next order. Then the pallbearers lifted the coffins and marched slowly to the three aircraft as a band played a somber hymn.

It took nearly 30 minutes to finish the grim task of loading the caskets to the aircraft. The C-130 planes took off within 15 minutes of each other.

Not an ordinary day

On the caskets’ arrival at Villamor Air Base, police personnel, both men and women, cried as they reached out to touch the coffins.

The farewell ceremony turned into an outpouring of grief from those present, including generals, ordinary servicemen, and incumbent and former officials.

“This is in recognition of their heroism and a sign of mourning. This is not an ordinary day,” said acting police spokesperson, Chief Supt. Generoso Cerbo Jr.

Among the families who gathered at the grandstand was a 5-year-old boy who only found out his father was dead the moment he was led to the casket of PO2 Olivet Viernes.

Viernes’ wife Virgie brought her two children, ages 5 and 11, with her when she left Tuguegarao City on Monday after confirming her husband was dead.

She simply told her boy Carlo that they were going to meet his father in Manila.

“He kept on asking, ‘Why do we have to meet him? When will he come home to us?’” said Virgie, who said her husband was scheduled to come home in March for a visit.

Her husband’s cell phone had apparently been taken as a man would answer it when the family would call, she said.

Virgie said she wanted an “all-out war.” “They should pay for what they have done,” she said.

SAF troopers carried the caskets in a slow procession toward the grandstand while honor guards stood at attention and a band played a dirge. Policemen barricading the media were seen wiping tears.

The President’s absence was glaring.

There, too, were former interior undersecretary Rico Puno, the President’s uncle Peping Cojuangco and his wife Tingting.

Tingting Cojuangco said she had seen the bodies in the cornfield in Mamasapano and as they were brought to the morgue.

“I saw the bodies in the cornfield, in the creek. There were shots in the head not too much in the body. Some had no uniform, only underwear. Did he (President Aquino) see that?” Cojuangco said.

“This is slaughter,” she said.

“It was just appropriate that they are received by their colleagues in SAF,” Cerbo told reporters as the coffins were flown in.

When the families of the slain policemen were allowed to get near the coffins, loud cries filled the air. Even before the doors of the C-130 were opened, wails pierced the solemnity of the rites.

The remains were transported in hearses from Villamor Air Base to funeral homes before they were brought to Camp Bagong Diwa in Taguig City, where necrological services were to be held. With a report from AFP

Aquino did not snub arrival honors for slain cops – Palace