Scenes of euphoria repeated in every papal motorcade 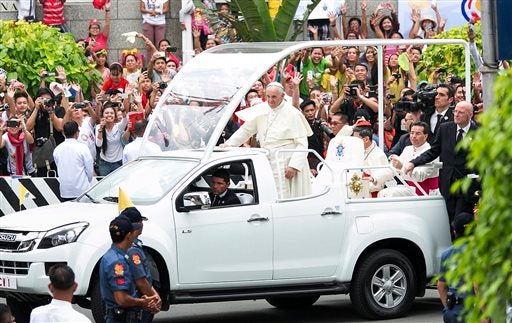 Pope Francis arrives at the Cathedral Basilica of the Immaculate Conception in Manila, Philippines, Friday, Jan. 16, 2015 while thousands of Filipinos welcome him with excitement. Pope Francis celebrated the holy mass with bishops, priests, nuns, and seminarians as part of his Apostolic Mission to the Philippines. (AP Photo/Ron Soliman)

MANILA, Philippines–Crowds lined up for miles along emptied Manila roads to catch even the slightest glimpse of Pope Francis on his second day in the country Friday.

Though missing their signature traffic jams,  the roads designated for the Pope’s motorcade were instead packed with surging greeters eager to see the Pontiff, with some even braving the cool January dawn to secure prime viewing positions.

Weather is also a concern for the five-day papal visit, with Tropical Storm “Amang” (International name: Mekkhala) threatening to hit the Eastern Visayas in the coming days.

The first papal motorcade of the day began around 8:00 a.m., when the convoy left the Apostolic Nunciature  for Malacañang Palace for the formal courtesy call with President Benigno Aquino III and the meeting with the diplomatic corps.

Although the masses thronged along Quirino Avenue expected the Pope to be waving at them atop one of the iconic “popemobiles” prepared for the visit, the Roman Pontiff instead returned their greetings from a black Volkswagen Touran with the windows rolled down.

The masses were not to be dissuaded, however, and welcomed the Pope with the warmth so often attributed to the Filipino people, with the scene repeating itself again and again every time the papal convoy left for a venue.

Jubilant crowds shrieked in enthusiasm in every instance the Pope passed them by, from the Apostolic residences to the Palace, to the Manila Cathedral and back to the Nunciature.

The very same energy shown is expected to be displayed once more when the papal motorcade makes for the Mall of Asia Arena for the meeting of the families.