At Vatican’s request, path of papal motorcade tweaked—from U to S-shaped
Philippine Daily Inquirer / 02:46 AM January 16, 2015 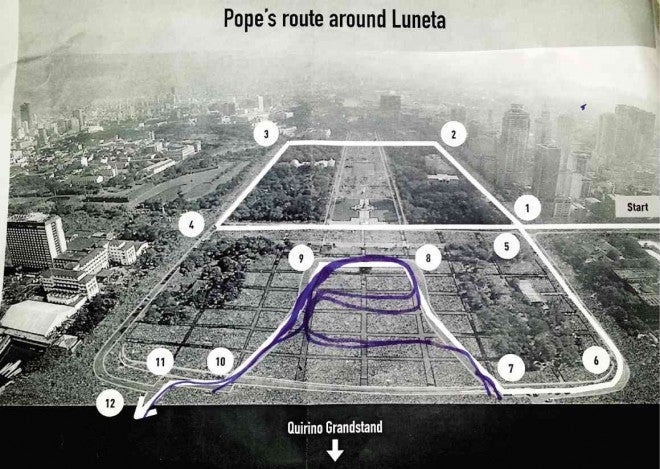 U-TURN AIN’T ENOUGH A map presented by the police on Thursday shows the crowd-control scheme at Rizal Park for the Jan. 18 Mass of Pope Francis, whose motorcade route has been changed—from U to S-shaped—for longer and closer exposure to the public. PHOTO COURTESY OF PNP

MANILA, Philippines—The path for Pope Francis’ motorcade when he makes his way to the Quirino Grandstand in Rizal Park to celebrate Mass on Sunday has been adjusted to allow more people to see him up close.

The change “was in response to the request of the Vatican that Pope Francis (be allowed) to move closer to the crowd,” Interior Secretary Mar Roxas said in a briefing hours before the Pontiff landed at Villamor Air Base for a five-day visit on Thursday.

Roxas explained that from the original U-shaped route, the papal motorcade would go around on an S-shaped path so that Francis could be seen by more people gathered before the grandstand.

At least 6 million people are expected to pack Rizal Park for the Pope’s 3:30 p.m. Mass. In a crowd-control measure never before seen in mammoth events held there, the park also known as Luneta has been divided into at least “50 quadrants” marked with concrete barriers.

After giving his blessing to the people, Pope Francis would be brought to the grandstand to change vestments before celebrating Mass.

Aside from the altered motorcade route, all other arrangements for the papal visit will proceed as earlier planned. “If there are any more changes, at the end of the day it will be up to the Pope to decide,” Roxas added.

Noting that the majority of the police had been tapped to secure the Pope’s route, Roxas said “criminals who would take advantage of the situation while the Pope is here and our policemen are focused on the papal visit (would be committing) a double mortal sin.”

The Philippine National Police said it had deployed 25,000 officers for the papal visit, devoting up to 70 percent of the Metro Manila police force to the special task.

As in previous pronouncements, Roxas said “a whole-government approach” had been adopted to ensure the Pope’s safety.

Metropolitan Manila Development Authority Chair Francis Tolentino said the government and the Catholic Church had done their part to prepare for the papal visit and that the rest is now up to the public.

“The government and the Church have done all they could, now what is needed is your cooperation to make it work,” he added.

Roxas said the PNP had prepared “backup extrication plans” for Pope Francis in case of a medical emergency, a terrorist threat or should the crowd become unruly.

Meanwhile, Armed Forces chief Gen. Gregorio Pio Catapang Jr. reminded the public not to fall for alarmist or misleading text messages that may circulate during the papal visit.

“If you receive any such text, do verify it first and don’t forward it to someone else,” he said.

Philippine National Police officer in charge Deputy Director General Leonardo Espina announced that the PNP hotline (0917-8475757) was ready to receive reports and complaints from the public.

PNP spokesperson Chief Supt. Wilben Mayor urged the public to comply with government restrictions at the papal events, particularly regarding the items banned at the venues.

“As much as possible, the government wants the papal visit to be convenient to anyone. We should be thinking of other people as well, of other’s convenience and not just our own,” he said.

He pointed out that the public should behave during the papal events as if they are in a place of worship.

Presidential spokesperson Edwin Lacierda appealed for cooperation from the public as he urged everyone to heed the government’s safety reminders.

“Stay calm, no pushing, don’t run. We have reminders on what to bring and what not to bring.”

Read Next
Secretary Soliman: Street kids not ‘caged’; 400 of them singing for Francis
EDITORS' PICK
Heads may roll at BOC, says Palace if sugar smugglers are allowed to use recycled import permits
Palace: Biggest supermarkets in PH commit to sell sugar at P70 per kilo
What to watch out for when selecting a video surveillance solution
House energy committee chair Arroyo bats for cheap electricity
vivo brings to the Philippines a powerful smartphone with a slimmer body, the vivo Y02s for only PHP 6,499
DOH reports increase in daily COVID-19 deaths, mostly unvaxxed
MOST READ
Alyssa Valdez to miss Creamline’s AVC Cup campaign
Brian Poe-Llamanzares receives his PhD in Public Administration
Mayor bares issues vs closed QC school
Peso loses ground vs US dollar
Don't miss out on the latest news and information.