It was a vital, vibrant welcome worthy of “the center of the Catholic Church in Asia.” Hundreds of thousands of Filipinos filled the streets to welcome Pope Francis to the Philippines late Thursday, and veteran Vatican spokesman Father Federico Lombardi SJ could barely contain his astonishment.

“Already this first encounter of the Pope with the Filipino people is very impressive, important, very touching,” Lombardi said at a press briefing held about 30 minutes after the papal motorcade had reached the Apostolic Nunciature on Taft Avenue in Manila.

He joked about how difficult it was to keep a running estimate of the crowd. At one point in the route, “already [I counted] several hundred thousand people,” only to revise his estimate a little later. “I will say many, many hundred thousand people” came out to see the Pope upon his arrival “here in the center of the Catholic Church in Asia, in this fundamental continent.”

“In any case, there was an impressive number”—and he said the turnout would rejuvenate the Pope after an exhausting day. “The Pope has a charism. When he sees the people, when he’s with the people, he (draws) this energy from the people around him. (He is) inspired by the faith of the people present. In this sense, he has new energy.”

He added: “This first meeting with the Filipino people will encourage him.”

He told the journalists gathered at the International Press Center at the Diamond Hotel and also those following the briefing via a live video hookup at the second press center at the Manila Hotel that Luis Antonio Cardinal Tagle, the Archbishop of Manila who was seated behind Pope Francis in the so-called Popemobile, had shared an anecdote with him.

Seeing the crowd that had turned out to welcome him, the Pope said to Tagle: “The Holy Spirit will have to work [within me] to touch the heart of every one [who came out to see me].” 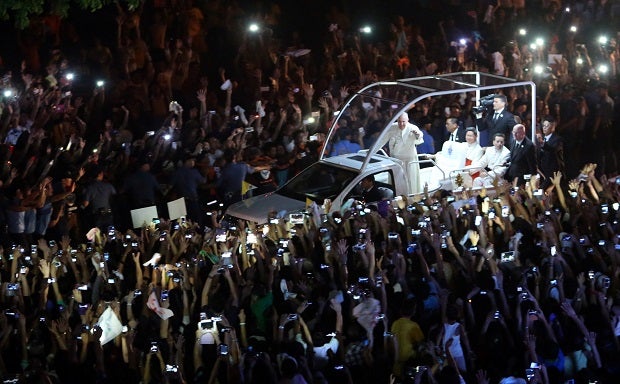 POPE FRANCIS wave to crowd on his way to Apostolic Nunciature along Quirino Avenue. JOAN BONDOC