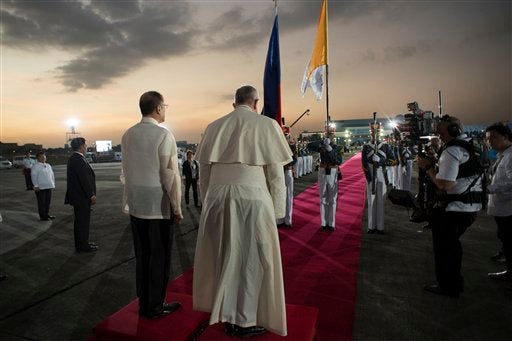 MANILA, Philippines – A special sandwich with a cheese filling bearing the image of Pope Francis was one mother’s way of welcoming the leader of the Catholic Church.

The image was posted on Twitter, like that of a watermelon carving of Francis courtesy of a chef from the Bicol region.

Other Filipino Catholics, though not as creative, expressed their excitement and admiration in the form of makeshift posters as they lined the streets when the papal convoy motored from the Villamor Air Base in Pasay City.

In his first trip to the predominantly Catholic Philippines, the leader of the world’s 1.2 billion Catholics received a rousing welcome, Filipino-style.

It “not surprising,” tweeted Greg Burke, the Vatican’s communications adviser, that “Welcome to the Philippines Pope Francis” became a top trending topic, hours before his Sri Lankan Airline Airbus 340 touched down from Colombo.

Francis, the so-called “Pope of Masses” for his simplicity and charisma, is finally here. And Filipinos, known for their deep Catholicism and popular piety, couldn’t get enough of him.

An angel, a rock star, a living saint with a cute smile were among the tweets netizens posted as social media broke into frenzy upon Pope Francis’ arrival early Thursday evening.

The digital display of faith multiplied as netizens followed the papal motorcade from the airport to the Apostolic Nunciature on Taft Avenue in Manila, his official residence while in the country.

“I can not think of any rock star who can draw this big a crowd here in the Philippines,’’ a netizen @mjayme posted on Twitter.

“Pag nakausap ko tong si Pope, kulang ang 24 hours sa mga isusumbong ko sa kanya (If I could speak to the Pope, 24 hours would not be enough for me to share with him my complaints),’’ another netizen posted on Twitter.

The frenzy created a riot of hashtags, as many as what netizens could think of to capture their emotions upon seeing the Pope.

“We Love You Pope Francis!” was posted by netizens who could not contain their emotions with the hashtag #popeinPh. It had to include #PopeFrancis #PopeFrancisPH #PapalVisitPH #BlessedByThePope and more.

The trip from Villamor Airbase to the Apostolic Nunciature in Manila, his official residence in the Philippines, sent well-wishers in a frenzy. People lined up along Roxas Boulevard hours before the Pope was scheduled to arrive.

In a statement, Malacañang described Francis’ message of “mercy and compassion,” the theme of his apostolic visit, as “essential elements of our caring and sharing ethos.” With reports from Denison Dalupang and Dan Paurom, Inquirer Social Media