For people who can’t get near Pope Francis, a glimpse is enough | Inquirer News
Close
menu
search

For people who can’t get near Pope Francis, a glimpse is enough

MANILA, Philippines–From his wheelchair, 86-year-old Nicomedes Uyani had to be lifted by the police to get inside the barricades surrounding the Manila Cathedral in Intramuros, Manila just to get a glimpse of Pope Francis. 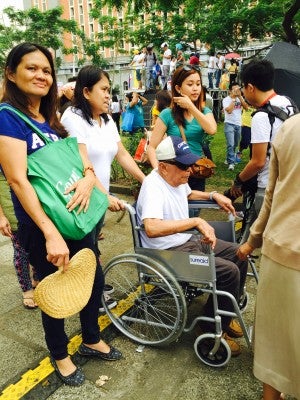 But Uyani and his children, who brought him to the cathedral, had to settle for the Pope’s face on a big screen since there was no way they could get closer to the Pontiff.

His family was just among the thousands of people who trooped to the cathedral to see the Pope and listen to his mass.

After long hours of waiting, however, Uyani went home without seeing the Pope’s face up close.

“OK lang (It’s OK),” he said when asked how he felt that he did not see the Pope physically.

But did he have a hard time going to see the Pope?

“Kung iintindhin mo ang hirap, hindi ka makakarating dito (If you will mind the hardships, you will not get here),” Uyani said.

Determined to see the Pope, the old man described as “legally blind” by one of his daughters, Eugene, would still join the big gathering at the Luneta Park on Sunday in a second attempt to get a closer look of the Pope.

If given a chance to see the Pope, he would ask for blessings and strength.

Eugene said her father came all the way from Oregon, USA and was initially scheduled to arrive to the country for a monthlong vacation in December last year. 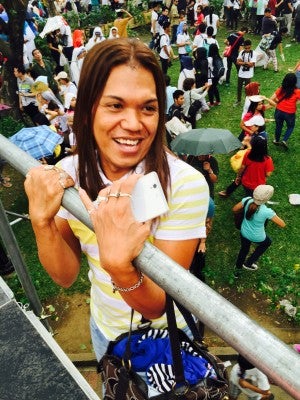 But when they learned that the Pope was also coming to the Philippines this January, she said, they moved the trip to coincide with the papal visit.

Despite this, Eugene said, they had no regrets that they went to the cathedral even if they did not see the Pope.

Steve Montalban, 40, also flew from Cebu to see the Pope and hear his mass.

As early as 12 midnight of Friday, Montalban said he was already outside the Church but still failed to get a good vision of the Pontiff.

He was all smiles even after he learned that the Pope already left the Church without seeing him in person.

“OK lang maganda naman kahit hindi ko s’ya makitang masyado (It’s all good even if I didn’t see him that much),” he said.

Seeing the Pope on a big screen was already enough for a 23-year-old lass, who only identified herself as “Jell.”

From Montalban, she and her friends traveled to Manila to attend to the Pope’s mass.

Asked if she was disappointed that she did not see the Pope, Jell’s quick reply was: “Ay hindi ok lang po, malapit po kasi sa monitor na malaki (No, it’s OK, I was near the big screen).”

Perry Chua, 56, of Sampaloc, Manila, meanwhile, blamed the people taking photos and videos for blocking her view of the pope.

She said she was already outside the cathedral at 4:00 a.m.  but she only saw the Pope’s face.

Read Next
Reds abort scheduled release of cops as Army rejects ceasefire
EDITORS' PICK
Heads may roll at BOC, says Palace if sugar smugglers are allowed to use recycled import permits
Palace: Biggest supermarkets in PH commit to sell sugar at P70 per kilo
What to watch out for when selecting a video surveillance solution
House energy committee chair Arroyo bats for cheap electricity
vivo brings to the Philippines a powerful smartphone with a slimmer body, the vivo Y02s for only PHP 6,499
DOH reports increase in daily COVID-19 deaths, mostly unvaxxed
MOST READ
Brian Poe-Llamanzares receives his PhD in Public Administration
Peso loses ground vs US dollar
Alyssa Valdez to miss Creamline’s AVC Cup campaign
Rhian Ramos on new beau Sam Verzosa
Don't miss out on the latest news and information.